Yesterday was not only when the last colour combination for Summer of Colour was announced, it was also the last day of our holiday. And what a day it has been (sorry, this is going to be a longer post). N's flight was at 4pm, so we headed to the airport after lunch, had an iced tea in one of the cafés before it was time to say goodbye. I waved him off, heavyhearted, then took the next train back home, checking the airport app and seeing that his plane had left on time on the way.
I felt very sad and lonely returning to the empty flat, and thought I'd keep myself busy with drawing and painting until I heard from him from London. I was just going to check the arrivals at the London City Airport website to see what time the plane was scheduled to arrive. But instead of a time, it said "diverted, contact airline". What did that mean?? Diverted? Where to?? I dialled the number of the airline and waited almost 20 in the queue until I finally got through. The woman I spoke to didn't seem to understand my question at first, until, while we where speaking, she received the update on the flight - there was a technical problem with the plane, and it had to return to Zurich, expected back at 4.50pm (it was already 5.15). I jumped up and got ready to leave for the airport, but then decided to stay at home for the moment, as here, I could look up the flight on a plane tracker site and stay updated. I saw that the plane had been circling around over the Zürich since it left and seemed to have settled into a steady loop south of Lake Constance.
It is a scary experience, knowing that your boyfriend is somewhere high up in the air in a plane with a technical problem, but being able to see the plane on the website, and seeing that it was flying at a constant height and speed was somewhat reassuring. I kept checking the site, and shortly before 6 saw it leave the loop and head towards the airport. I was very glad when I saw both altitude and speed at 0, and relieved to receive a text from N shortly afterwards, saying that all was well. The flaps on the wings that help the plane slow down while landing had broken, and it was our guess that they decided to return to Zürich because London City Airport is a very small airport in the middle of the city, with only short (too short in this case) runways. They had to circle for two hours to burn off fuel to make the plane lighter, as it had to rely only on the brakes on the wheels for landing.
It would still take some time for them to be wheeled back to the gate and sort out the new flights, so I decided to pass the time with drawing and painting this week's challenge. It wasn't until after 8.30pm when N was finally back - without his suitcase, which they had kept to transfer to the new flight. At least we got a few extra hours together out of all this. As he lives on the south coast, in Dorset, a flight on the same day would have been too late for him to get home. So we left again for the airport this morning, said our goodbyes again, and I left for work, which at least will keep me busy during the day. But it will feel very sad and lonely again at home tonight. We did have an absolutely wonderful holiday though, although a bit too hot at times. 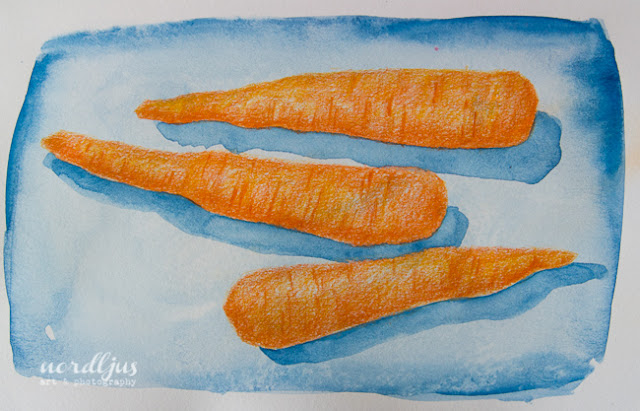 I love drawing and painting carrots. They are, somehow, very satisfying to do, both shape and colour wise. And I love the combination of orange and blue.

I very much enjoyed Summer of Colour this year, and I'm glad to have managed to finish it. Having a theme has certainly helped. A big thank you to Kristin for hosting the challenge, and for everyone who took part and made this such a great, warm and supportive community.

I'm happy to say that I just received a text from N, that he's landed. In London. Now I just hope his suitcase will be there too, and that the rest of his journey will be smooth too.
Posted by Nordljus at 13:04