Are you enjoying  your Easter break? Did you remember to put your clocks forward today? I must admit I'm not a fan of switching to summertime. You get up early, and it's already late. And I've started going to work a bit earlier two weeks ago, so that means that next week, I will have to leave the house in the dark again. 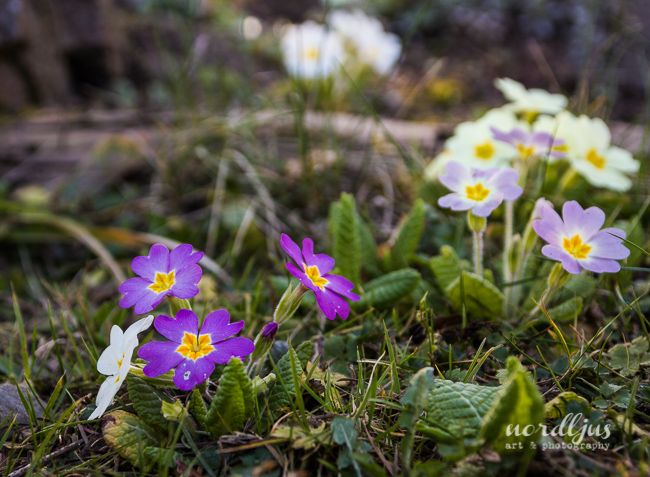 I am having a quiet and relaxing Easter break at home, doing a bit of this and that, and sometimes not much at all. The weather is a bit of a mixed bag. Pouring down with rain all Friday, a sunny and warm spring day yesterday, and for today and tomorrow, it's going to a be a bit of everything - sun, clouds, rain. 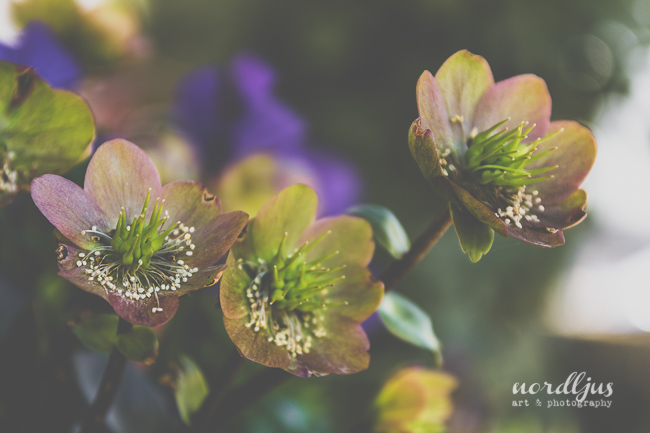 Yesterday finally felt like a proper spring day, so I grabbed my cameras and went out to snap some spring flowers. I've been seeing lots of photos of beautiful magnolia trees in full bloom in the UK on Instagram, but here, they're still only just beginning to blossom. I love this magnolia tree at the bottom of my street, and I'm looking forward to seeing it bloom every year. I just hope that we get a few nice and dry days to enjoy it as much as possible. 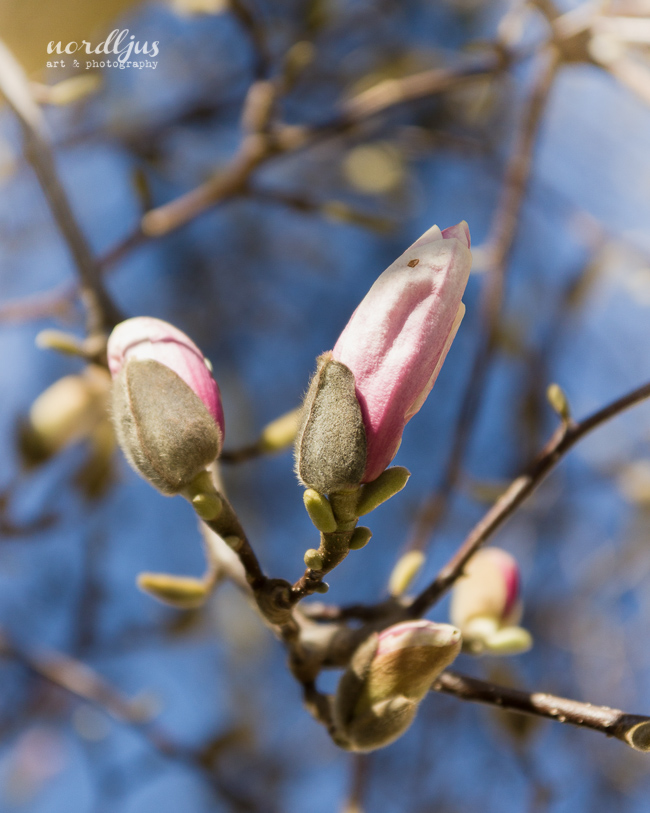 Lots of flowers appearing in the gardens too, big and small. 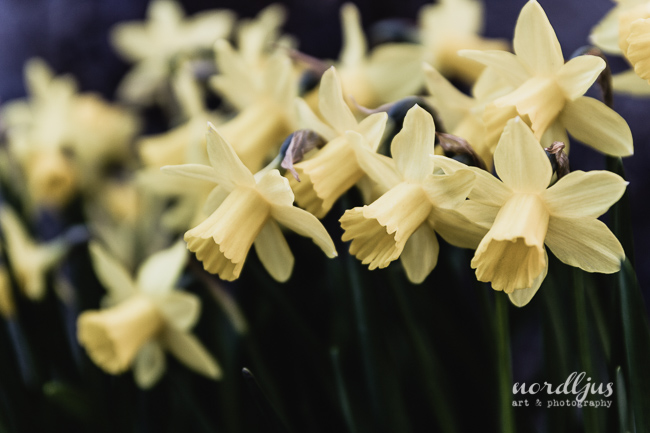 A special anniversary, and the art of bulb growing

Yesterday, my aunt and uncle celebrated a very special anniversary - their 65th wedding anniversary! Here in the German speaking part of the world, it is called "Eiserne Hochzeit" - the iron anniversary. I created a card for this special occasion, using one of their wedding photo as a template and reproducing it with a transfer technique, some tea staining and watercolours. 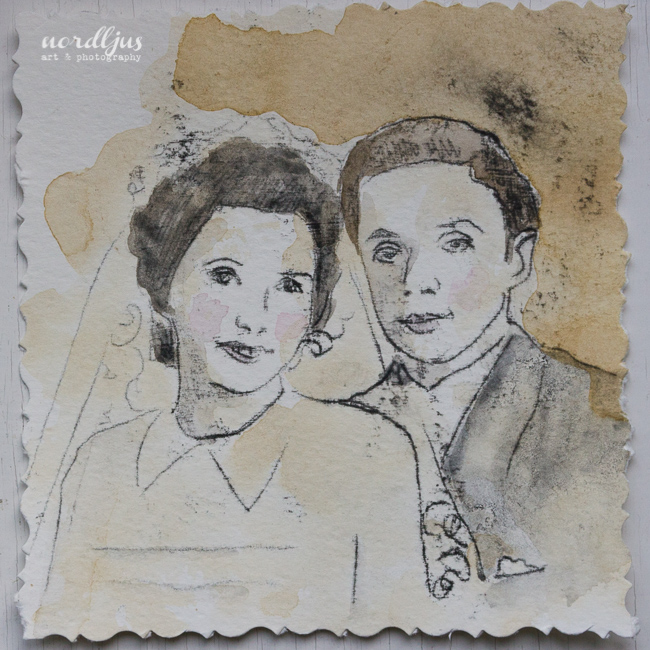 The cut out image went on the front of the simple card of watercolour. I'm thinking about adding some lines on top and bottom, but I haven't quite decided yet. 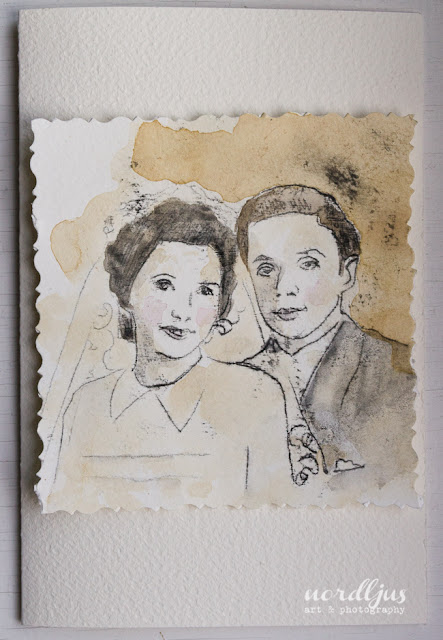 For the main text inside, I used my new Pilot Parallel pen. It was quite hard work on this rough paper, but I like the effect of the broken line. I was just afraid that it would ruin my new pen. Tomorrow, we'll be celebrate this anniversary with the whole family. It means spending 7+ hours on the train there and back, but it's well worth it, and I'm looking forward to it very much. 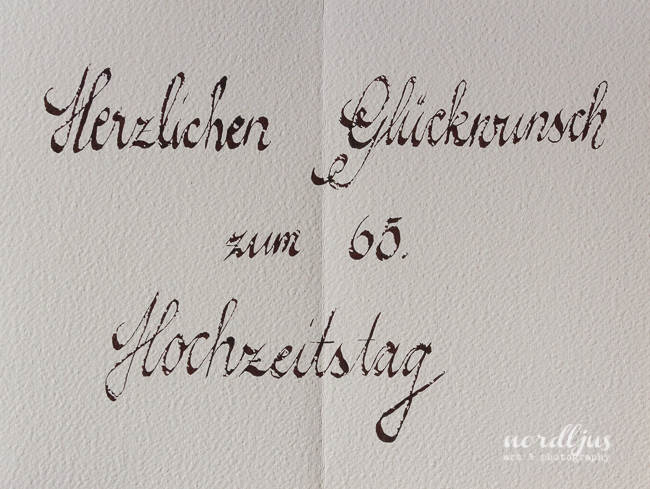 As to growing flowers from bulbs - I'm sure there's a special art to this, but one that I, unfortunately, haven't mastered. I saw all these gorgeous images of amaryllis blooming at Christmas, and crocuses and narcicusses ready for spring. I bought two amaryllis in November. One produced such huge leaves that it threatened to fall off the windowsill, but never any flowers. The other one shot up and flowered within half the stated time, only to wither a couple of days later and then completely collapsed. 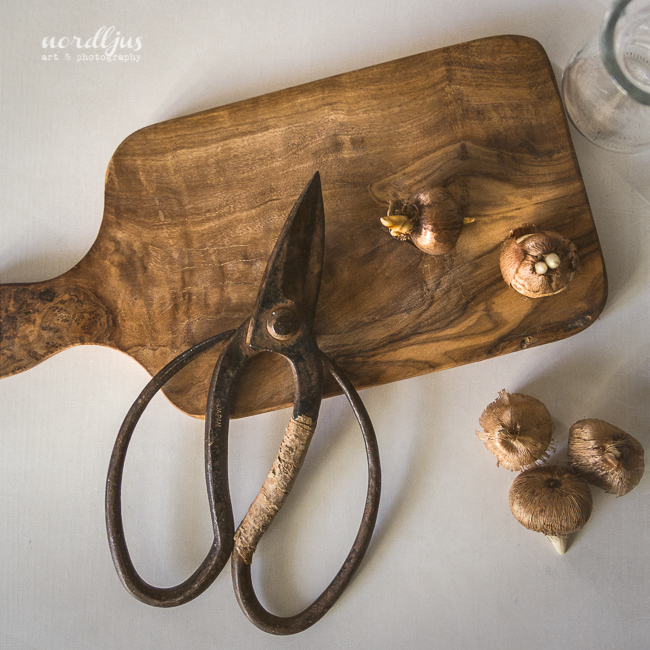 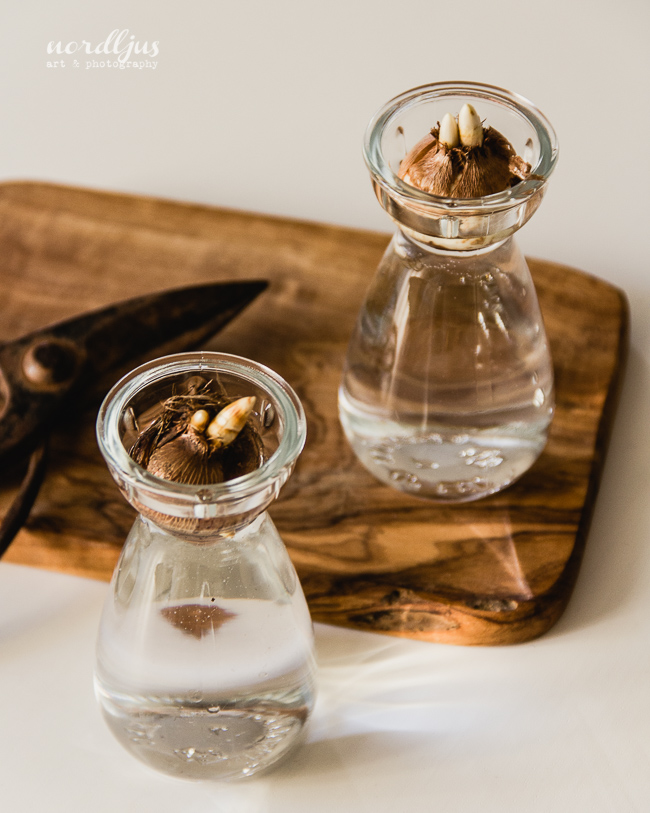 The crocusses I nursed for weeks in the dark of the cellar, watering them regularly and watching their progress. There was another one in a glass, that started to rot weeks ago. In the pot there were three bulbs, one shot up, one remained small and the third rotted away too. So I was looking for just two flowering plants. But they wilted away before they even started to flower properly. I don't know what I did wrong. I was trying to find the magazine with the gorgeous flowers (they didn't seem to have any of my problems) but I must have thrown it away. And I'm afraid that's where these are going too... 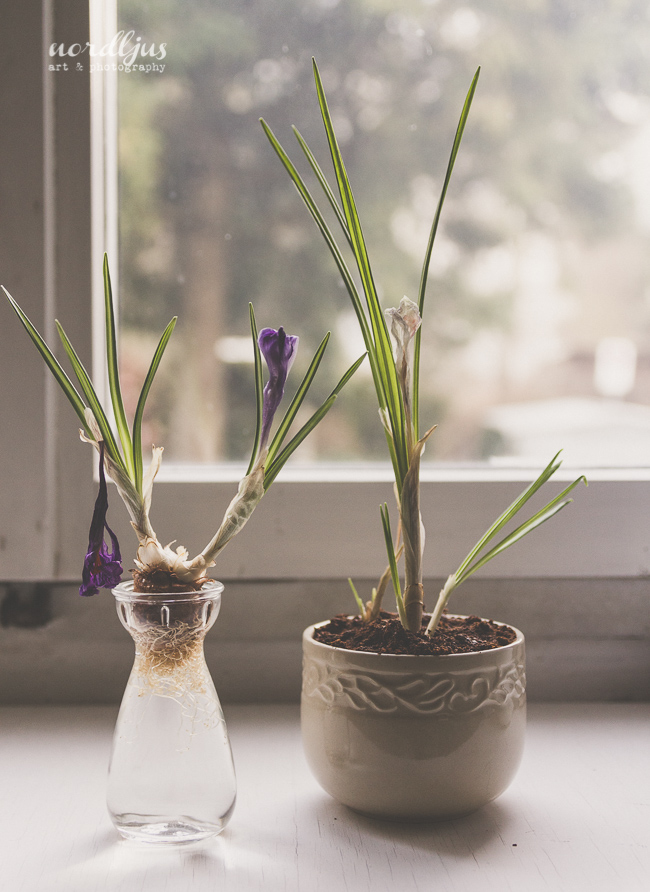 Another not quite weekly painting

After a break of some weeks, I finally did another of my "weekly" paintings. It is only No. 7, but that's okay. And I was too lazy to cut up one of the large sheets of paper into the 25x25 cm squares I used for the first six, so I just took a pad of watercolour paper. 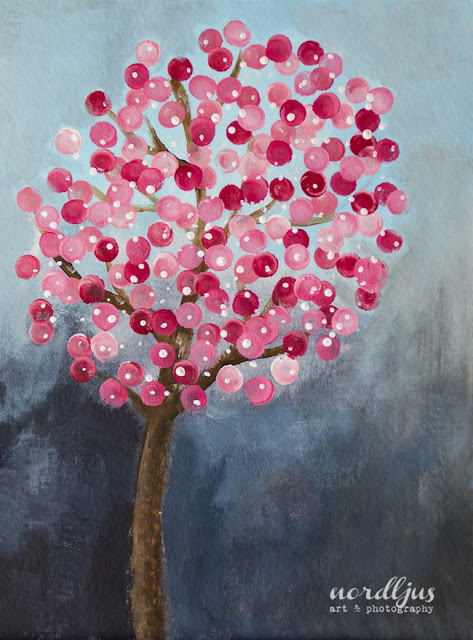 I thoroughly enjoyed painting this over the course of the day, which reminded me that I really should do it more often. And to play and experiment much more. Get down several layers of just play before allowing it to develop into something. There was another stage between the first one above, and final one below, but I forgot to take a photo. 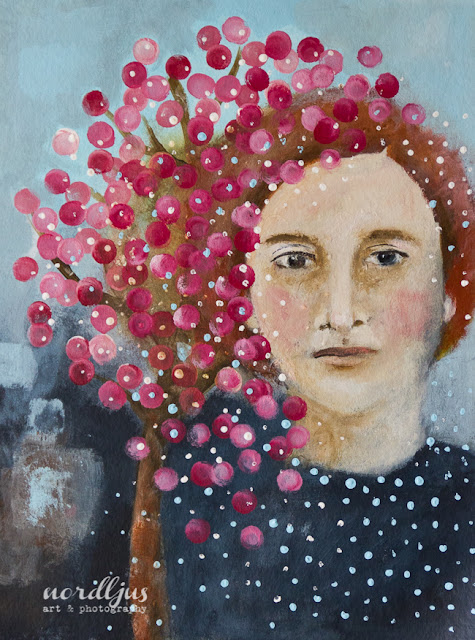 I don't always want to work on my big easel, especially with these small paintings, it's more comfortable at the table. But I just simply cannot work flat on the table. I've done it lots of times, and almost always with the same result. It looks alright as long as it's flat in front of me, but as soon as I hold it up, the whole thing is distorted. One solution would be to stand up while painting, but bending over it all the time doesn't do my back any good at all. So last week, I went to the art shop and got a table easel. This one is wide rather than high and can be used at a low angle too. And on top of it was cheap. It really works perfectly for me. 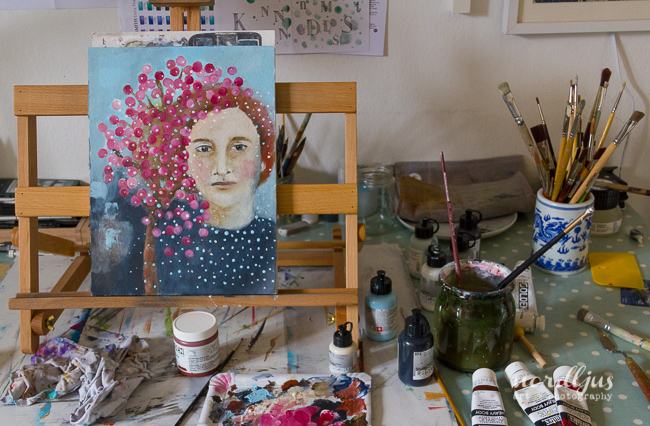 I love stamps and stencils, and although there are tons of beautiful ones out there to buy, making your own is much more fun and you'll never have to worry about copyright and can be sure that they'll be unique.

I've been inspired by two classes to get my cutting board and knife out again. I mostly use sheets of transparencies to make my stencils. Their A4 size is large enough to make a bigger stencil and they're easy to cut but sturdy enough to paint over them. Depending on how elaborate and detailed you want your stencil to be, you can either take your time to draw the design on a separate sheet of paper and then trace it on to your transparent. Or you can just take a waterproof pen and draw it on to the transparent directly, which is what I did here.

I got my big Moleskine journal out one evening earlier this week, and just quickly and randomly put some paint down and while that was drying, I cut out the stencil. I used paint with it, which of course works perfectly fine, but I went to the art shop in my lunch time the next day to get two cans of spray paint to try out. It gives good opague and even layer, and I really like the result. 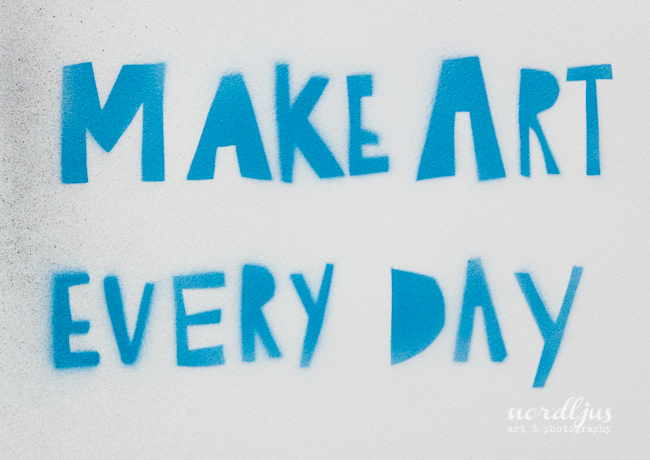 I'm still trying to do something creative every day, but I'm not always succeeding. Now, that the semester started again, and the university is filled with so many more people, I'm finding it much more difficult to sit in the cafeteria to draw and feel comfortable with it (which I already don't really feel even when there's only few people around). And then there's so many other things getting in the way sometimes, many of them things that I enjoy doing too. And that's fine. As long as I remember to sit down and paint or draw something - or carve a stamp or cut a stencil - as often as possible, even if it isn't every single day. 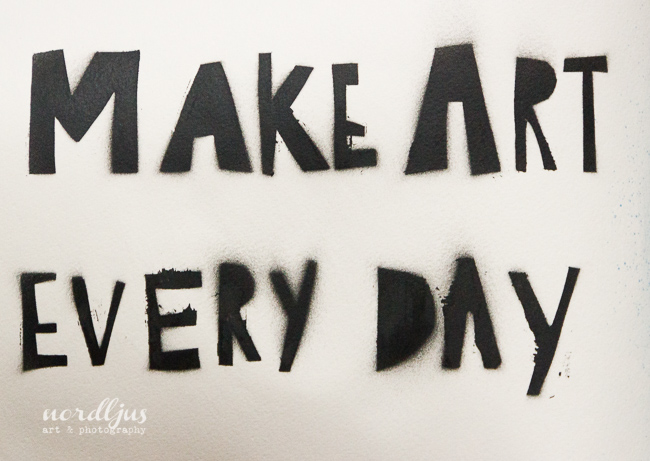