It's been a while

It's been a while since I've been here, and in the mean time, not only another year has ended, and a new one begun, but spring is almost upon us as well. Not that it feels much like it at the moment. It's the coldest it's been this winter, -6 degrees Celsius max yesterday, and today it0s snowing like mad. It's not that I haven't done anything in these past three months. I've been working through a couple of online classes, doing some lunchtime sketching at work, but none of it particularly share-worthy. And my energy level has been about as low as the temperature at the moment, making it a struggle to pick up a pen at all in the evenings and at the weekends. But hopefully, things will pick up again soon now.

At the weekend in any case, I felt inspired to pick up my (new) pen for a quick pre-lunch sketch, before the pepper and courgette went into my curry. 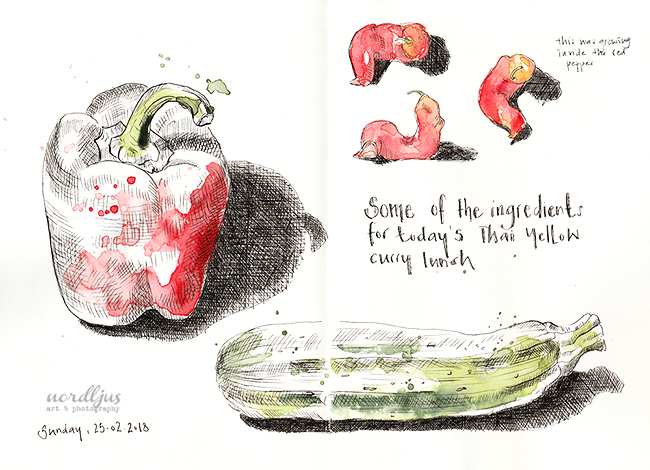 I've started a little illustrated recipes book almost four years ago, but haven't added a lot of recipes. I don't like to cook. I only cook because I want to know what's in my food and don't want to eat processed and ready meals. I don't enjoy it, so cooking has to be quick and easy, something to get over and done with so that I can spend the rest of the time doing something I actually enjoy. Because I'm such an uninspired cook, I usually don't know what to cook. And that's why I've started this book. So that I have a number of quick and easy recipe ideas at hand. And while I don't enjoy the cooking itself, at least I had some fun drawing the recipe. I first started cooking this delicious Thai Yellow Curry a few months ago, and when I cooked it this Sunday, I realised that I had forgotten to buy a tomato, and I couldn't remember how much fish sauce went into it - was it one table spoon or one tea spoon? So I decided to spend the afternoon adding the basic recipe to my little book. Hopefully, more recipes will follow soon.

In January, N and I spent a lovely holiday together here in Switzerland. Lots of relaxing and going for walks in the area, but of course we also had to go on a day trip to the mountains for my birthday. This time we decided to head to the canton of Wallis, to Zermatt. From there we took the train up to Gornergrat at 3100m. There isn't really much you can do up there in winter, if you're not skiing, but it was a quite mild day with lots of snow, sunshine and a deep blue, cloudless sky, and so we ended up spending about 4 hours up there anyway. The views all around were absolutely spectacular. 29 mountains over 4000m, the Monte Rosa massif with Switzerland's highest peak, the Dufourspitze (4634m), the alps second largest glacier, the Gorner Glacier, and a few more, and of course the star of them all - Switzerland's most iconic mountain, the Matterhorn.

What else? After I stopped going to Swedish classes a year ago, I wanted to learn something new and I found this fun app Duolingo. For the past few months, I've been doing my (almost) daily lessons (they only take about 5-10 minutes) and I can now say that Ik spreek een beetje Nederlands. Well, I guess it's a bit of an exaggeration, it really is only a tiny number of (not always very useful) sentences. It will definitely be quite a while until I can read my copy of Jip en Jannecke. Until then, I just look at the beautiful illustrations by Fiep Westendorp. But it's great fun anyway.

And then here's a film I want to go and see at the cinema - Ex Libris: The New York Public Library. Hopefully one day I'll have the chance to actually visit the library itself, but until then, this films looks like well worth watching. And as a librarian, I guess it is a bit of a must :)