For years and years, I've been wanting to make my own Christmas cards to send to friends and family, but apart from the odd card, I've usually ended up sending bought ones in the last moment. But this year, I was determined to make them myself, from start to finish. As the easiest way to get the same motif on a number of cards is by stamping it, I had to make a stamp first. I haven't really carved a whole stamp before, so I decided to go with a simple design. A bit rustic, reminding of an old wood carving. 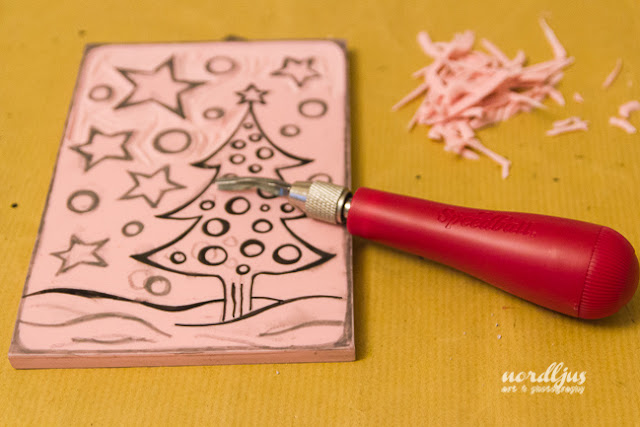 And here's the pile of finished cards, all coloured in. Now comes the hardest bit. Writing them. I'm not good at all at writing cards. It always makes me happy to get beautifully written Birthday and Christmas cards, and I always marvel at the eloquence of the writers, wishing I could do it too. But I can't. I'm just rubbish at it. I never know what to write. So I hope that this year, the cards will make up for the writing. And then I just hope that the recipients will enjoy the receiving the cards as much as I enjoyed making them. 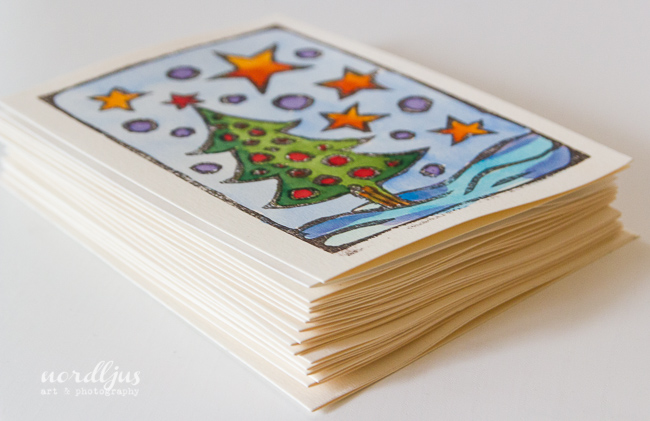 I've also caught the bulb bug. A few weeks ago I read about the different bulbs you can use to grow lovely flowers for you home in winter in a magazine, and decided to try it out myself. Now of course, amaryllis bulbs aren't anything new at all. But I think I had one once, years and decades ago, and I can't even remember if anything ever came out of it. So I thought I'd give it a try this year. I bought one called Aphrodite, a white one with pale pink around the edges, that came ready planted in a pot. I'm totally enjoying watching it grow from one little green tip just visible, and I've been drawing the stages in my sketchbook every week. And they grow so quickly! And there's definitely a flower pod beginning to appear. Can't wait until it starts blooming! I bought another, smaller, white one, too, and I'm thinking about getting a couple of crocus bulbs too.

I'm really enjoying drawing at the moment, trying out different materials and techniques. I always loved pencils, but watersoluble pencils are quite new to me. But they're great and a nice way to add some body, layers and texture, and all you need is a pencil, a brush and some water, so they might make perfect travel companions. I have taken out my art journal again, which I haven't used in quite a while, but which I should do more often. Such a perfect place to play and experiment. 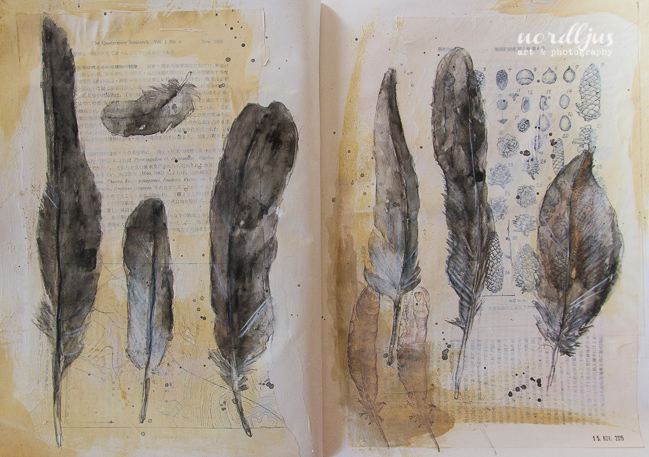 I've been collecting feathers for quite a while now. Or maybe collecting is the wrong word. I tend to just pick them up when I see a nice one, when I'm leisurely strolling around. Which I usually only do when I'm on holiday, which in turn means that almost all of my feathers are from England. Mostly from Hartfordshire and surroundings and Dorset, while walking around towns and villages, National Trust parks or the beach. I kept them all in plastic bags, hidden away in some stash boxes, when I finally got them all out and together in one place a few days ago. Lots of pigeon feathers, of course, but also a couple of beautiful duck feathers, crow feathers, swan feathers and a few that I have no idea what bird they come from.

A Dorset holiday in Polaroid

It's already over a month since I returned home from my holiday in beautiful Dorset. Where's the time going? Before I left, I was thinking about taking one of my Polaroid cameras along, but wasn't sure if it would be worth it. My trusted SX-70 Alpha 1 was the preferred candidate, but if it was going to be all grey and rainy, I wouldn't be able to get a decent shot. Well, I couldn't have been any more wrong about the weather. It was sunshine almost every day, and often actually almost too bright. I had ordered three b&w films to N's place before I left, so that I wouldn't have to carry them with me and get them damaged in the x-rays at the airport. But something was very strange with those three films. All of them showed strange spots and streaks appearing, and blown out areas at the bottom. I had taken lots of b&w photos the month before, same film, and they had all turned out well. I was beginning to worry that somehow my camera had taken damage during the trip, but when I put a colour film, that I had bought on our day trip to London, into the camera, I was glad to see that it definitely wasn't the camera. I don't know what was the problem with those films, whether they got some damage somewhere on the way from the factory, where just out of a bad badge, or if it was just too bright. I still treasure all of the photos I took, and I'm so glad that I carried the camera with me, along with my DSLR. 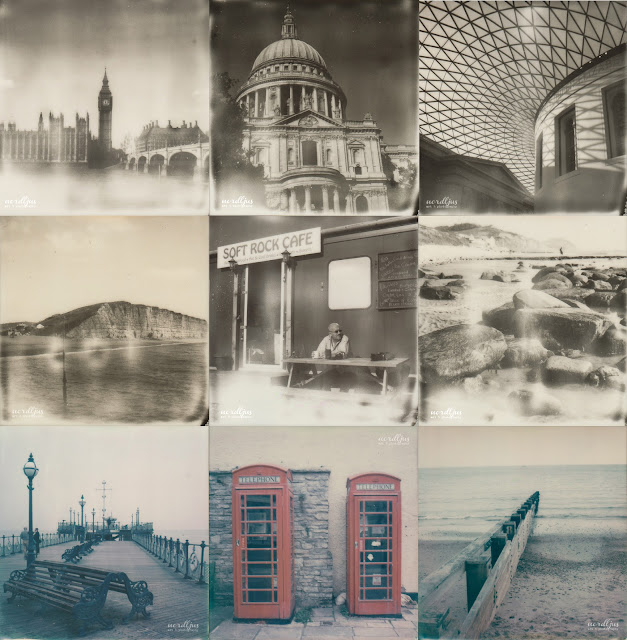 I have 30 photos from my holiday. Below you can see them all, wrapped into a story made with Steller.

Posted by Nordljus at 14:30 No comments:

I finished my autumn inspired painting. The original idea was for it to be all abstract, but a little leaf that I picked up on a walk and forgot in my bag, where I discovered it two days later, dried and neatly folded flat, made it on to the canvas.

I love the beautiful autumn leaves that we're getting in such abundance this year, thanks to the dry and calm weather. I've been out capturing them with my DSLR and Polaroid cameras several times. They're beautiful in all weathers and stages, and just so inspiring and uplifting. 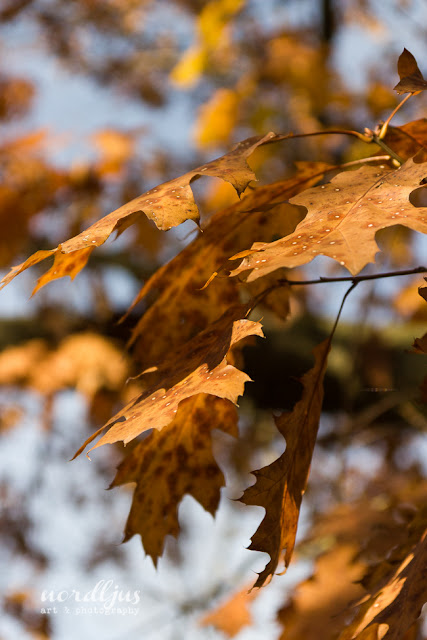 The beauty of a grey autumn day

I love autumn. Not being a summer person, at all, I'm always looking forward to when the days are getting shorter and greyer, and when the leaves change colour. And this year has been wonderful so far in that respect. The trees are glowing in gold and red, and the leaves are rustling under your feet, thanks to the dry weather. Most days, the sun manages to break through the heavy clouds by midday, but yesterday, it remained grey. I have to admit that I like it when it does so. It does look pretty when the golden leaves glow in the sun, it's true, but it's when it's heavily overcast that the colours really come out at their best, I think. Especially on photographs. 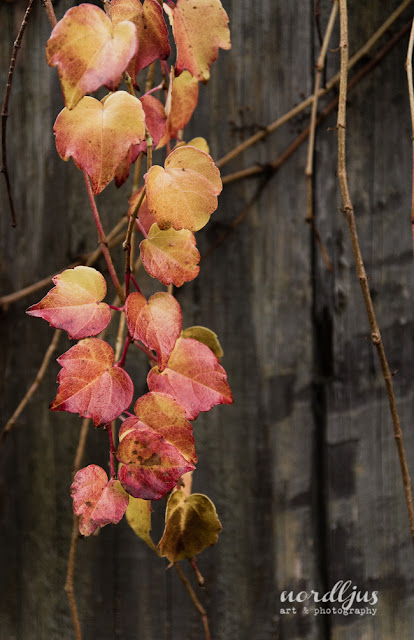 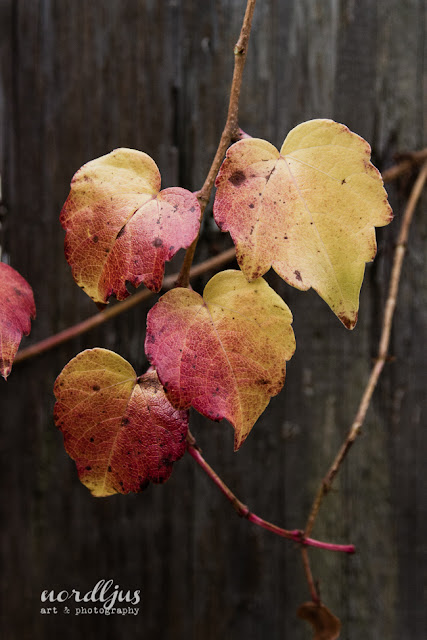 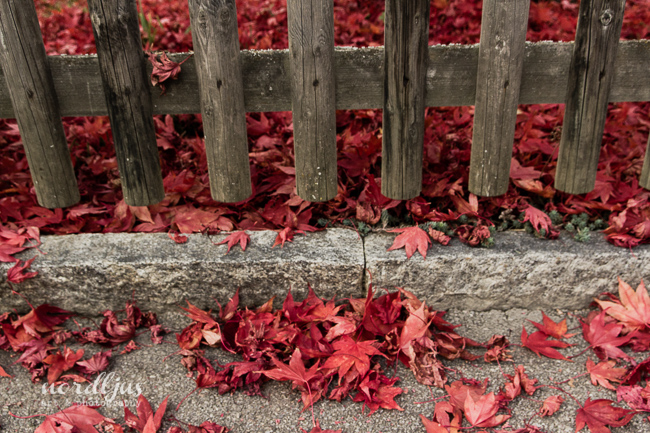 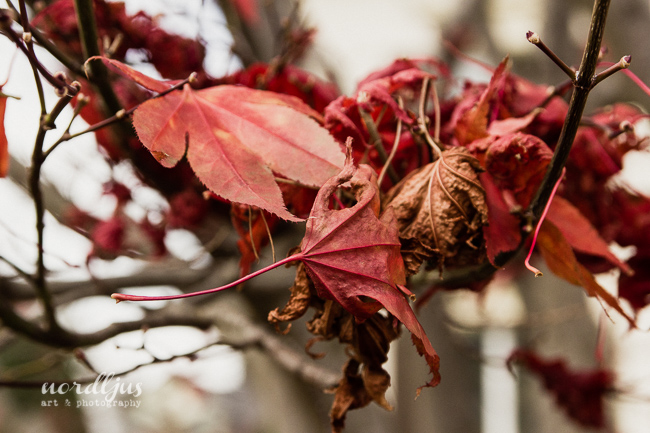 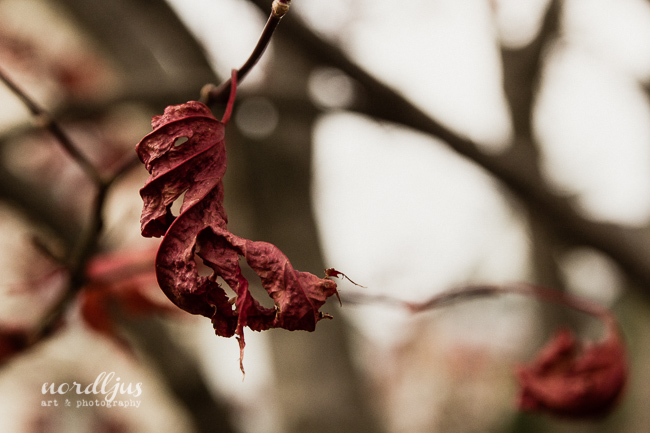 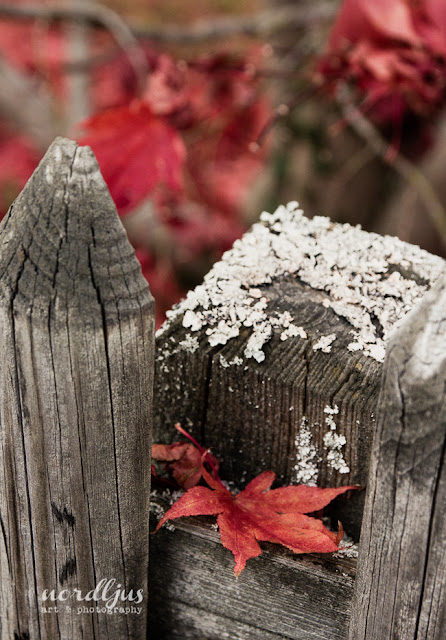