The joys of travelling by air, and how not to get overwhelmed but keep on sketching

I'm back from a wonderful holiday, which, as usual, went far too quickly. The journeys were rather less enjoyable, though. My very early morning flight to London City Airport got cancelled due to technical problems, and I had to travel to Heathrow instead, which meant that I didn't catch my £14 pre-booked train from Waterloo but had to by a new ticket for £58. My suitcase wasn't on the same plane either, and I didn't receive it until after 8pm the following day.
My return flight was cancelled again, this time due to the heavy thunderstorms over Europe. That, of course, is nobody's fault, but I was beginning to get rather fed up. Luckily, I had arrived at the airport very early, and was re-booked to an earlier flight. Like all the other flights, it was much delayed, and while we waited for another 45 minutes on the plane to finally be able to leave, three passengers were asked to leave the plane again because it turned out that it was too heavy. I've never heard of anything like that. But I was very glad that they hadn't asked me...!
I decided to contact the airline, since this was not the first time I've had problems. Cancellations and and delays seem to have become the norm in the past couple of years, and I'm happy to say that they have agreed to reimburse the extra costs I had as well as giving me a generous voucher for my next flight. So all is well again, and I just hope that my next upcoming journeys in September and October will go a bit smoother for a change.

But anyway. On to more pleasant things. I took my drawing tools, watercolours and two sketchbooks with me on holiday for some outside sketching. It's something I've been wanting to do for a long time, but I have always found it very intimidating and overwhelming. But this time I was determined. I had even treated myself to not only a new box of watercolours, but also some new watercolour brushes, including two beautiful travel brushes. One of our first day trips was to Tintinhull Garden, a charming little house and garden, and when we arrived there, the sun had come out and it was warm and bright blue sky. So no excuses. I got my gear out, switched off my brain and started sketching. I always find it difficult to get the proportions right. My drawings usually tend to get far too big. So instead of trying to capture the whole house, I just focused on a detail, starting with with the bird statue and then added whatever fitted in. 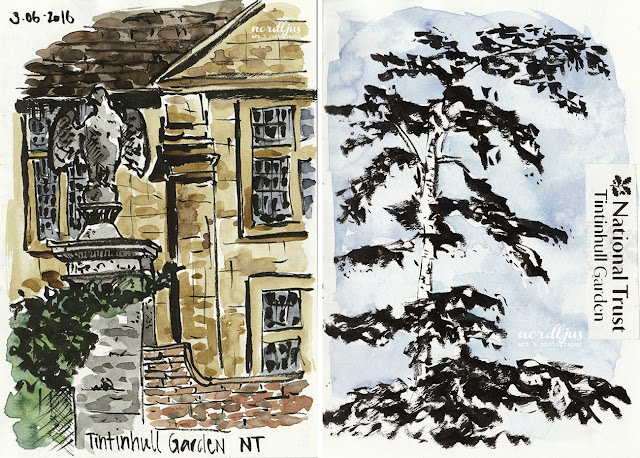 I love visiting those old stately homes and gardens. It's a perfect day out for me. Some interesting history, furniture and art work in the houses, gorgeous flower gardens (with lots of opportunities to photograph bees on flowers), park and woodland walks, and a restaurant to enjoy a lovely lunch and tea breaks in between all the strolling. And the parks are filled with trees. Beautiful, ancient trees. 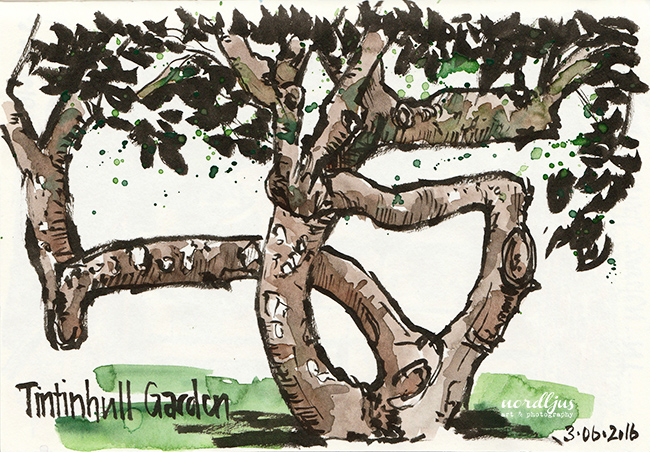 On Sunday, we drove to Salisbury. Again, after a grey start of the day, the sun came out, and it got hotter and hotter. I never thought that I would ever say the words "it's too hot to sit outside in the sun!" in England! But it certainly was. Thankfully, inside the cathedral and cloister, it was nice and cool, and there were plenty of seats to sit in the cloister to sketch one of its arches. 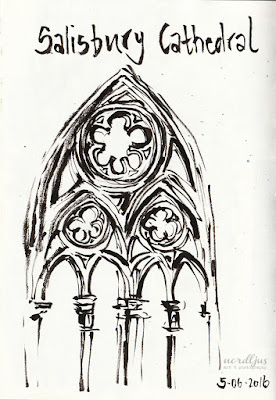 Glastonbury was a new place to discover for both of us, and a fun place to spend a day. It has a lovely town centre, with almost every shop specialising in some branch of the esoteric. A bit weird, but very charming. We spent most of the time in the grounds of the abbey, though, and much of it sitting on benches in the shade. Another hot and sunny day. The two watercolour sketches were made in different journals, the one on the left in a Seawhite sketchbook, the one on the right in a Moleskine watercolour journal.

Forde Abbey was probably my favourite of the stately homes we visited. The house itself is a 800 year old former abbey, and the park and gardens are just gorgeous. Again I took some time to sketch while N wandered around taking some more photos. The hedges caught my eyes, and of course the trees.

Montacute House was another place we spent a lovely day at. Apparently, it's where Wolf Hall was filmed. I never watched the series. I tried but struggled with it as much after five minutes as I had struggled with the book after the first 30 pages, and eventually gave up, as I had with the book. Again, I was fascinated by the trees in the grounds. So much variety, so much character. 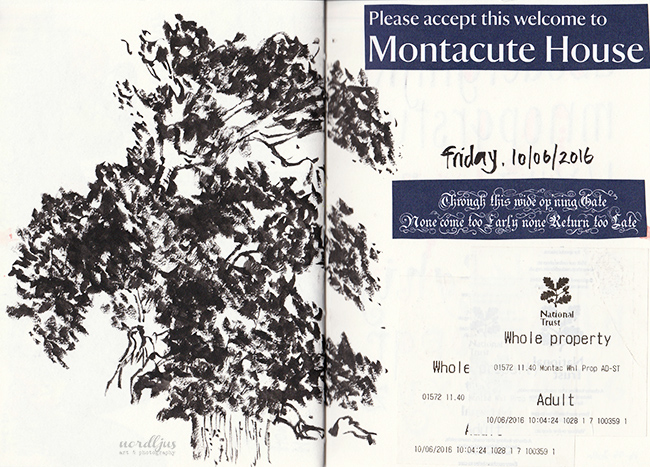 I'm so glad I finally got over my fear of sketching outside. It's not as hard as you think, and most people leave you in peace. Of course Ns comment of "Oh that's good!" on every sketch I did was also very encouraging :)
What helped me most, though, was to approach it with no expectations, and to do what was possible. Of course I would have liked to capture more complex scenes. The entire house. A corner of the garden. But that's still a bit too challenging for me. So instead I keep focusing on the details for the moment. A part of the house or ruin, an arch, trees. Instead of getting frustrated by what I can't do, I enjoy capturing what I can do, knowing that every drawing, every sketch is valuable practice. I'm sure one day I will be able to do those "bigger" sketches I'm dreaming of now. It's all practice, and doing the job. And my holiday sketching has given me so much confidence, that since I got back, I've done some more sketching in public.
I have some more sketches that I'll share next week, and I also hope to post some photos in a separate post. But it'll take some time to go through them and do all the editing.
Posted by Nordljus at 07:27 12 comments: 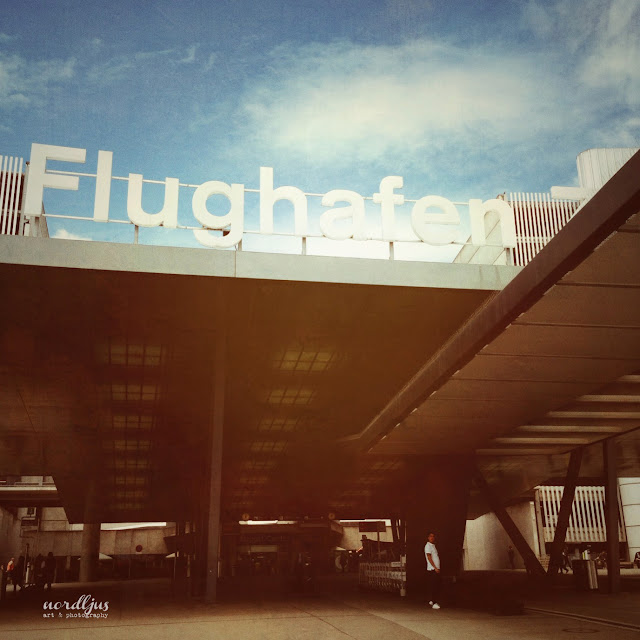