Ice lollies. They're basically what gets me through summer... I'm not a summer person at all, it's my least favourite season, and anything beyond 25 degrees Celsius is far too hot for me. But I think I'm not the only one who's glad that this heat wave is finally coming to an end. And my bronchitis has cleared up as well, at long last, last weekend, and I've got some energy back.
I've made some more banana kiwi lollies, but I also have some shop bought ones in the freezer. These melon and strawberry ones have been around for decades. The only ones of my favourite ice lollies that are still around. And I've eaten a lot of these this summer.... 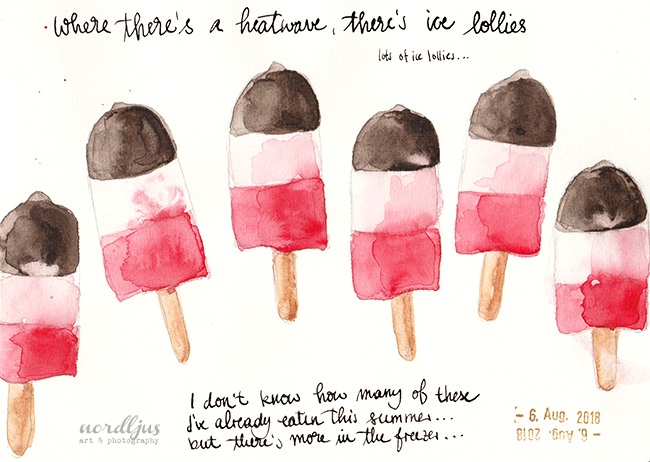 Cooking is also not something I feel like doing when it's 30+ degrees, and I usually don't know what to get and make. But this cucumber salad is perfect. Delicious and refreshing. I used to make cucumber salad with a "normal" salad dressing with vinegar and oil, but no matter how much herbs and salt I added, it always ended up watery and tasteless. This one is my Mum's recipe, I meant to ask her about it for ages, and now that I finally have, I immediately added it into my illustration recipe book, so that I won't forget it anymore. It still gets a bit watery, but it keeps its taste, and I love it.

During our holiday, we went to the nearby Wildlife park, which is always worth a visit. We didn't really expect to see many animals, it was a hot summer afternoon, and I expected most of the animals to hide in the shade and sleep. The enclosures are large and built to imitate the animals natural habitat as closely as possible, which means that there's plenty of room for them to be out of sight. But we were so spoilt, in fact, I don't think I've ever seen so many different animals in a single visit!

Moose are one of my favourite animals, and I'm always happy to see them, and what a treat to see them so close up! A big one was resting right next to the fence, and a small one was nibbling at the trees a few metres away. 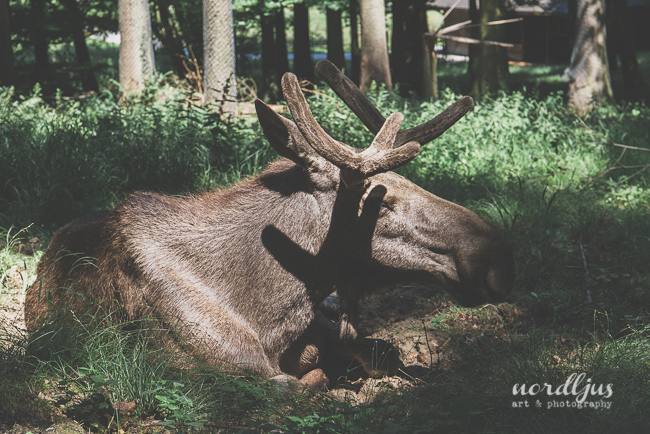 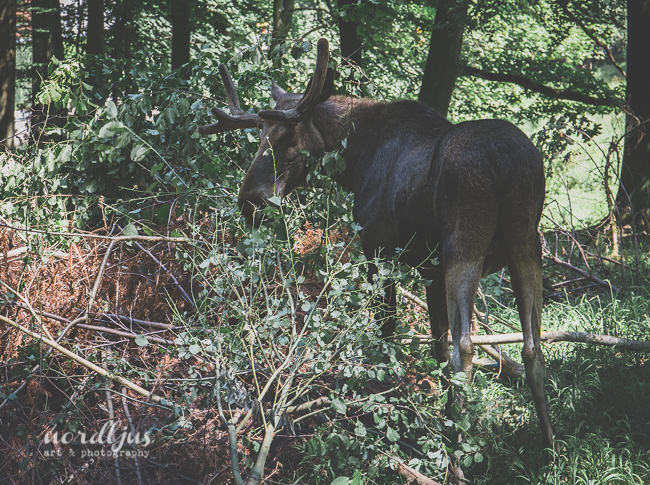 Of course there's plenty of wildlife in the woods and grass along the paths as well. 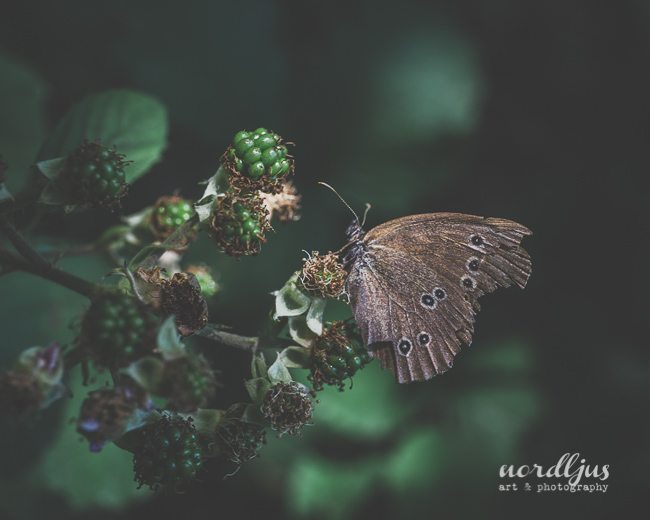 The mouse house is always worth a visit. They are just so sweet. But rather hard to capture, they are so quick. 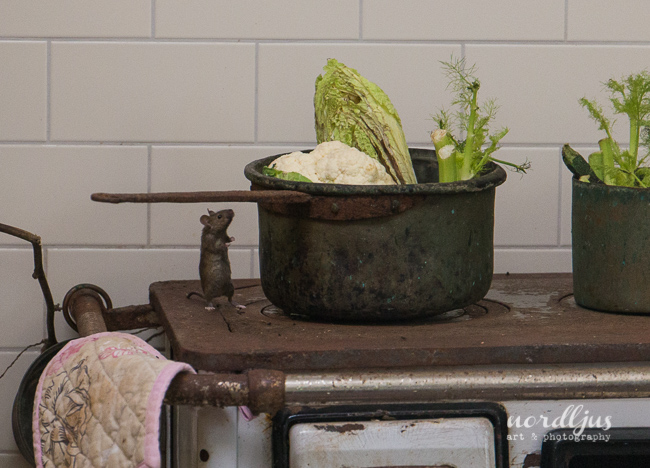 The shy and beautiful wildcats were also strolling around right in front of your eyes. Such gorgeous animals. 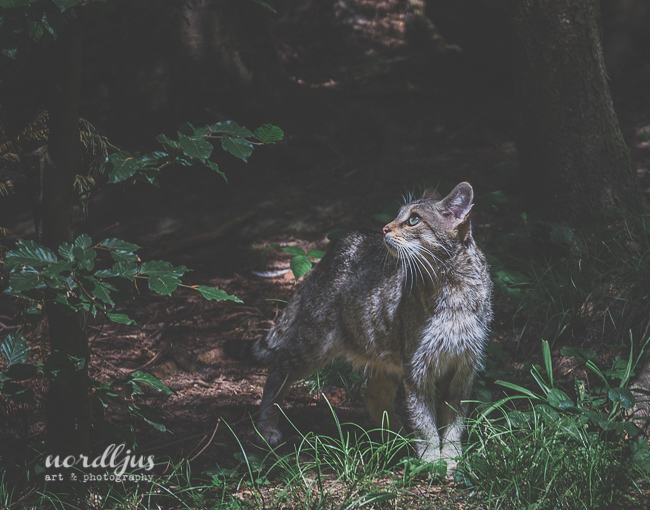 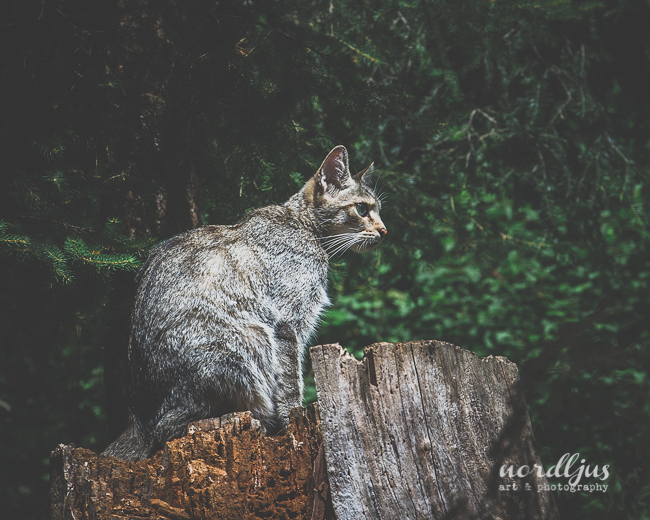 We were so lucky to see the bears not only once, but twice! They came all the way down from the woods to the water, I guess they were hot too and wanted to cool down. 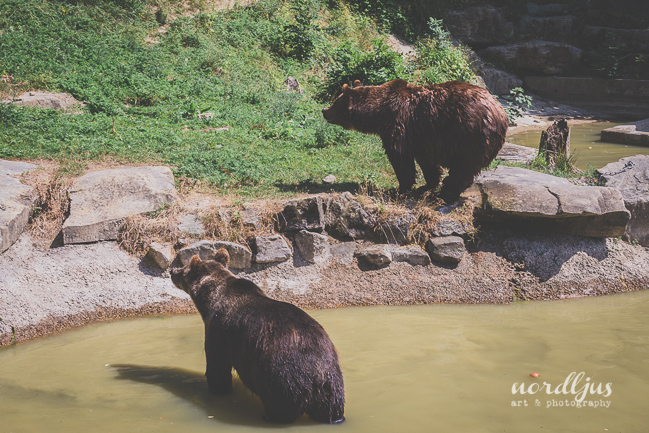 Junior had a splash in the water... 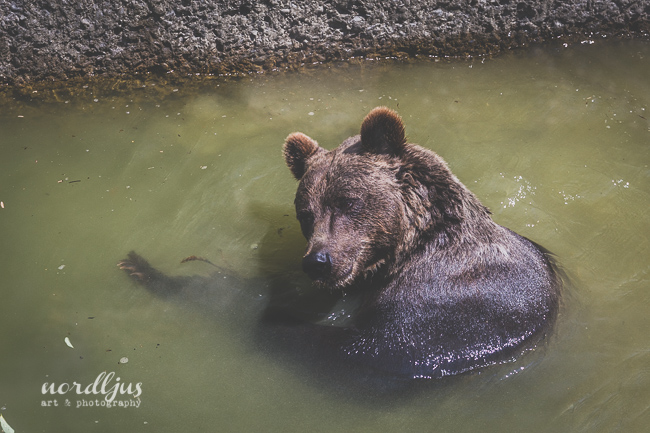 Splashing from Nordljus on Vimeo.


... while mummy bear was just staying cool and relaxed. 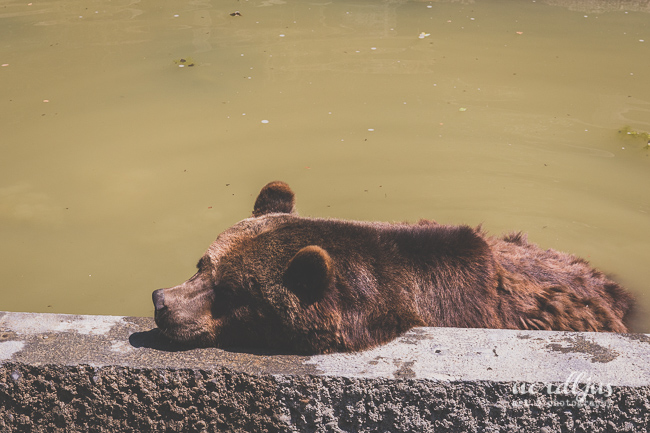 After we came back to the café for an ice lolly, the bears came back too. They too wanted a little snack. 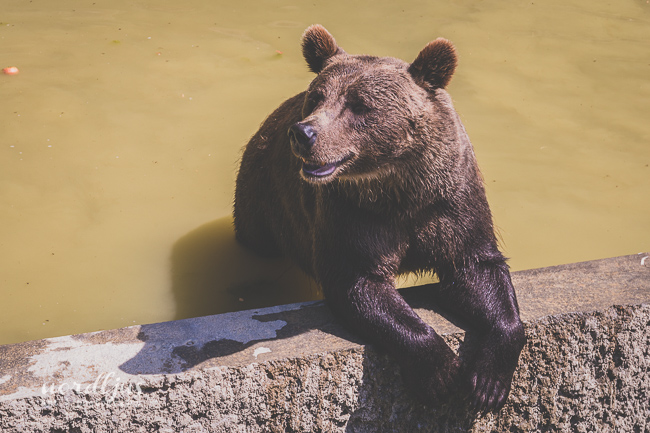 Feeding time from Nordljus on Vimeo.

We also saw the foxes, the alpine marmots, the wild boars, the bisons, including a baby bison!, the wild horses, and of course, the deer. But I didn't get many good photos, my wideangle/macro zoom lens is not really suited for animals. But it was a wonderful afternoon. We also went to the zoo, and I hope to share some photos from there next time.
Posted by Nordljus at 13:56 14 comments:

Well, this week hasn't been much different than last week. My bronchitis still hasn't cleared up and I've spent another week at home resting. I'm really getting fed up with it now. And it's still hot, even hotter than last week, which doesn't help. So not much time in the studio, but I got at least one sketch done. And I've edited some more photos from our holiday.

Back in April, I put together a new watercolour palette with 24 colours. Some I've been using for a while, and some of them were entirely new ones. This is what the new palette looked like three months ago, with all the pans filled with to the brim with delicious Daniel Smith paints. 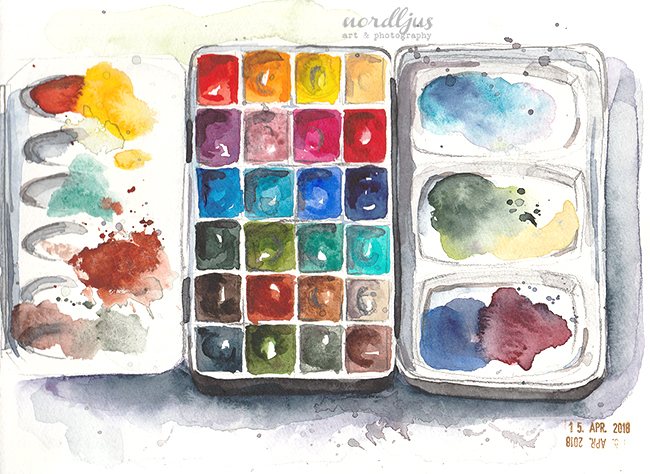 And this is what it looks now. I'ts quite obvious, well, it certainly is when looking at the box in real life, which colours were used a lot - and which ones weren't. There's not much left of either Payne's Grey or Alizarin Crimson, which I use mixed together as a shadow colour. And I love Sap Green. The only ones of the new additions that I did use where Rose of Ultramarine and Goethite. 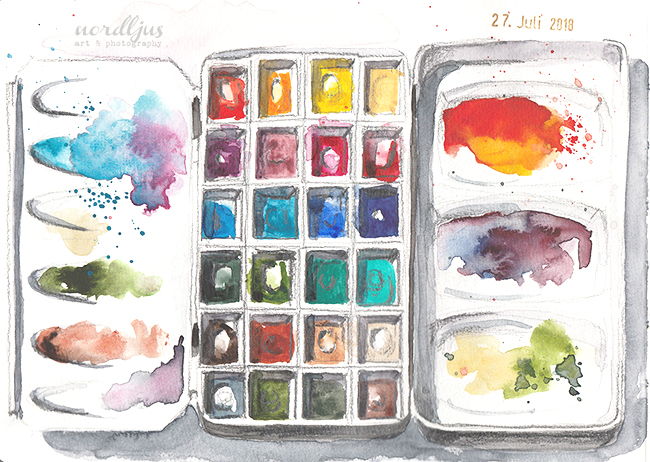 It's useful to look at your palette after having used it for some time, and see if there's any changes you might want to make. Maybe a certain colour didn't work out quite as well as you thought, and you might want to swap it for another one. Or you find that there's a colour missing that would be really useful. There's such a great range of paints available these days, in any medium, and it's very easy to get carried away and buy a colour just because it's so gorgeous.

We went on a couple of outings in the area. One trip was to the beautiful Seleger Moor. I've posted some photos from my last visit there back in May, when all the rhododendrons and azaleas, their main attractions, were in bloom. Even though there's not so much blooming at this time of year, it is still worth a visit. It's just a peaceful place to be, and of course there's always the frogs, bees and hummingbird moths. 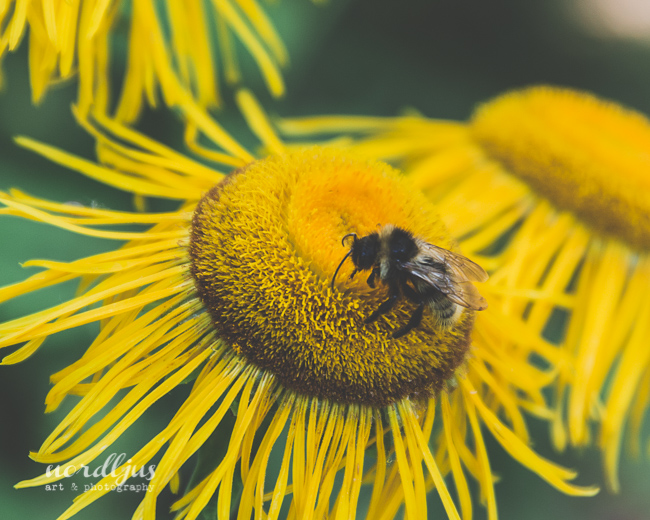 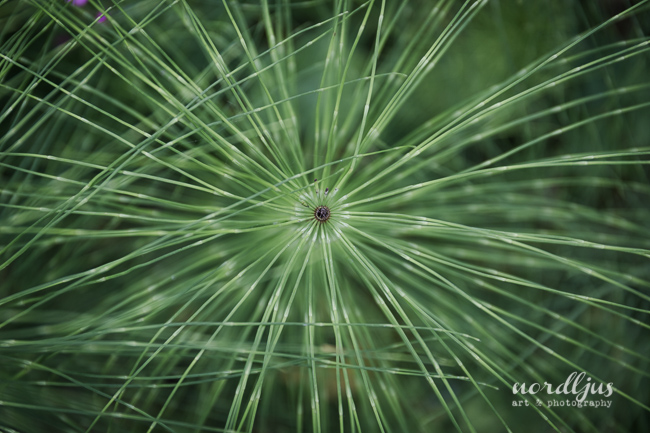 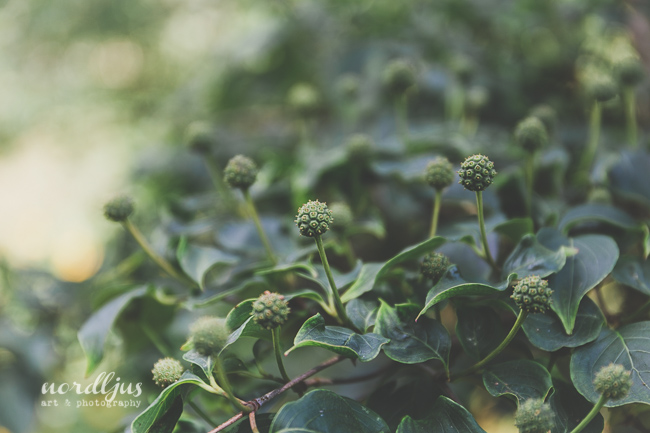 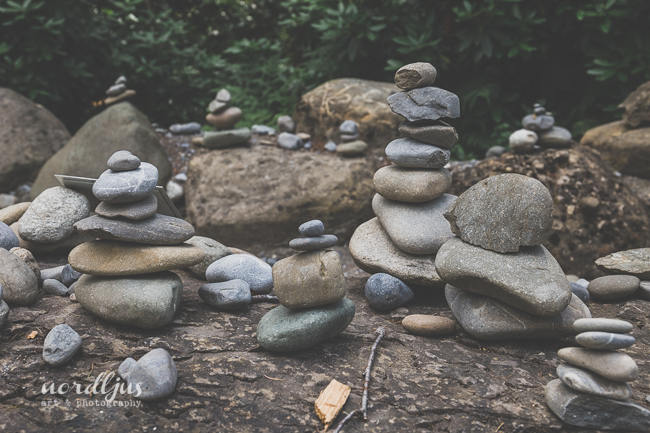 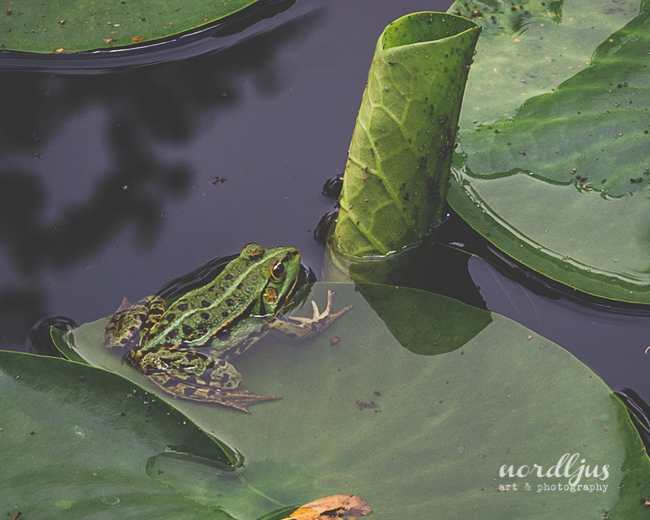 This gorgeous frog was sitting right in the middle of the path. Perfect for taking photographs. Can you see the mosquito in his back, sucking his blood? Poor little thing. I can imagine how he felt, I've got bitten about eight times while we were there. There's even a little insect sitting right on his nose tip. 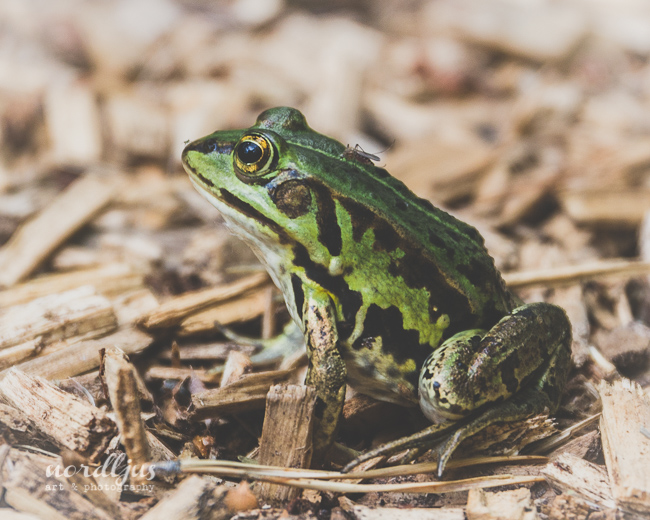 For our the last day of our holiday, we decided that we had done enough walking and that we wanted something a bit more relaxing. What better thing to do than take a boat trip. We took the train to Rapperswil and got on the boat for a short 12 minutes journey to Ufenau. It's a charming little island owned by the monastery of Einsiedeln. It has two medieval churches and a restaurant, and you can walk all around the island, with beautiful views of the mountains and the emerald, crystal clear water of Lake Zurich. 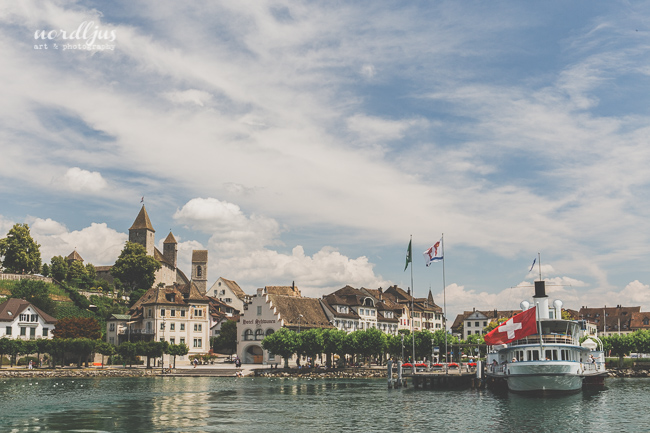 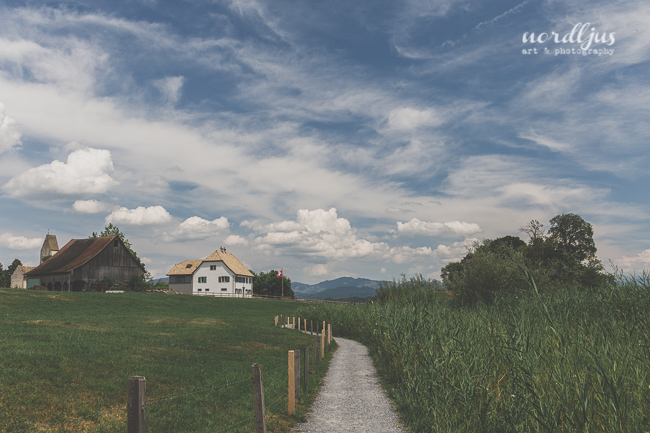 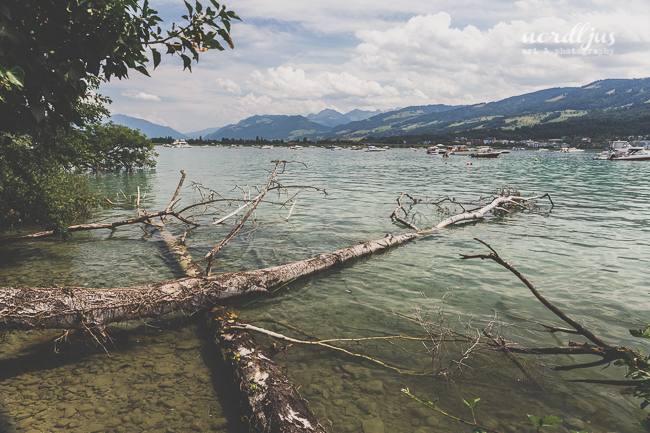 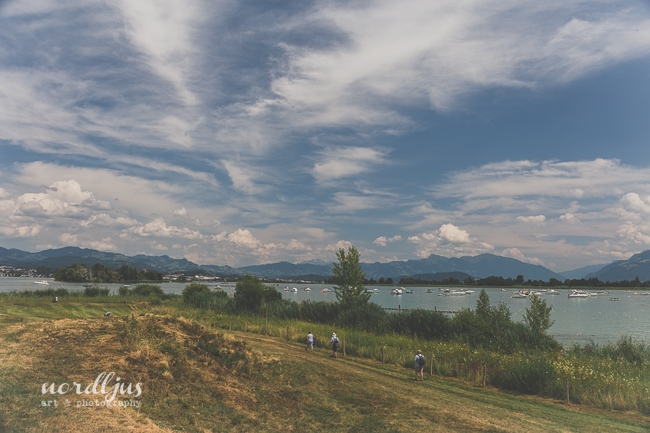 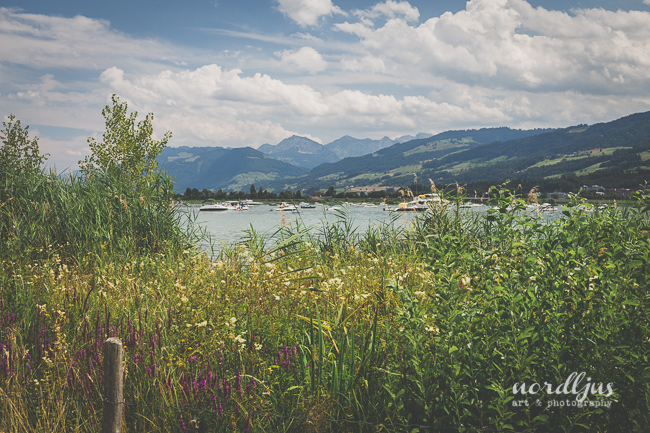 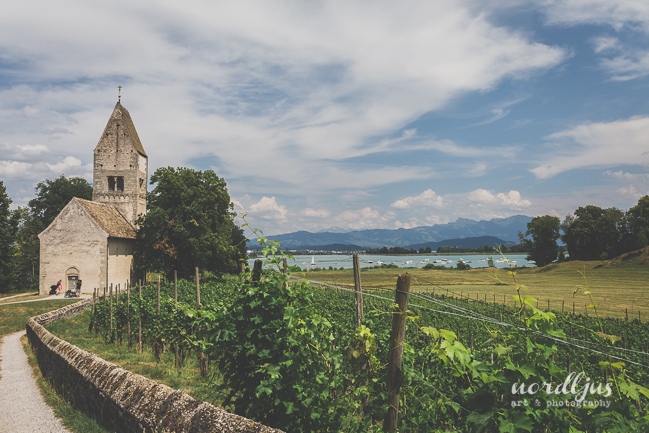 We even saw this bussard, sitting on a leaveless branch right above our heads. It kept calling to its mate, which answered somewher in the distance. Just amazing. 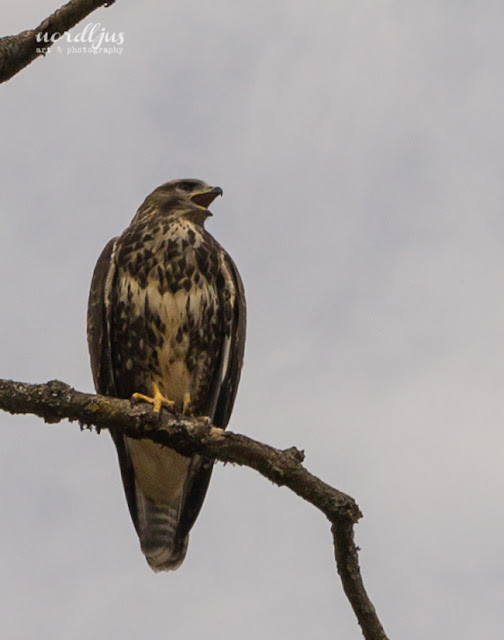 Bussard calling from Nordljus on Vimeo.

I will definitely go to this little island again some time this summer. Maybe do some sketching too. For for now, it was time to get on the boat again for the almost 1 1/2 hour journey back to Zürich. We had been thinking about getting off somewhere along the journey, but it was so nice and relaxing to just sit on the boat, in the breeze, and watch the world slowly pass by, so that we decided to stay. In fact, I enjoyed it so much, I would have been happy enough to just take the next boat, which was already waiting there, and do the journey all over again. 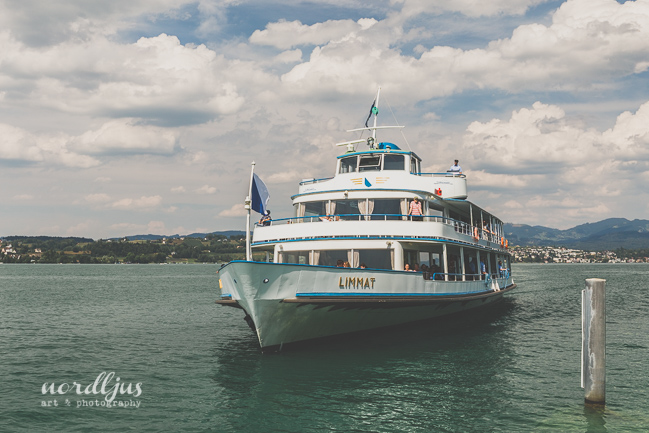