I've been wanting to make travel sketches for ages, and I've been filling my suitcase with all kinds of journals, sketchbooks and paint mediums on all my trips in the past two or three years. But it wasn't until my holiday a couple of weeks ago, that I finally started my first proper travel journal, documenting each day of my stay in lovely Dorset. (Well almost, I didn't bother to make a page for the shopping day in Exeter, when it was pouring down with rain all day long). Of course, I'm still dreaming of the ultimate travel sketch experience - placing myself on a cliff top, beach, in a busy town square, or café, my supplies spread around me, and sketching and painting right there. and then But that's rather unlikely. I like my holiday days to be filled, to be on the move, go places, see things, as many as possible. And my camera alone is usually already more than enough weight to carry around all day. And I'm also far to shy to sketch and paint in public. 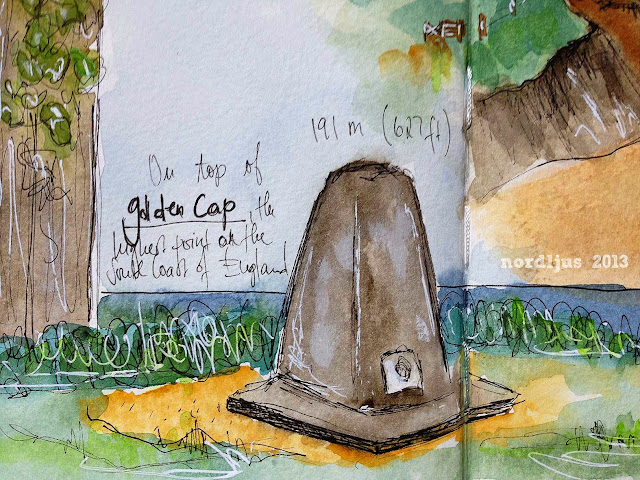 So instead I'm relying on reference images. This also means a different, or rather extended, approach to my photography. Apart from the carefully composed photos I usually take, I now have to remember to also take photos that will serve mainly or only as reference for the scenes and objects I want to paint later. Most of them are rather boring photos, but that's okay, as they serve their purpose. 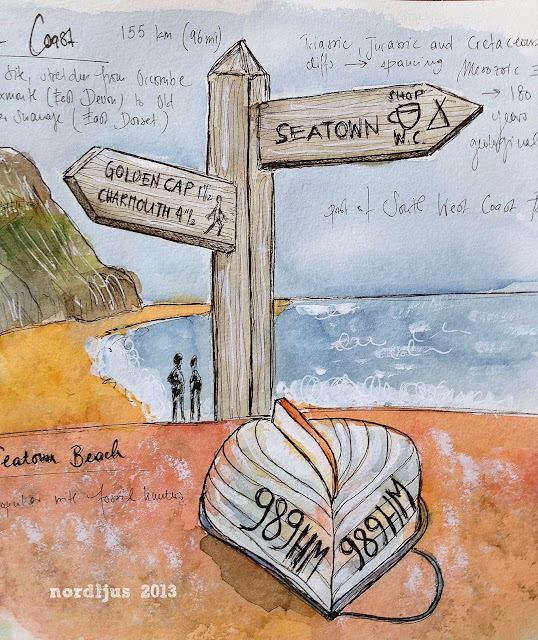 I took a travel watercolour box on my holiday too, but I never got round to do any painting. Instead, I just made simple pencil/pen sketches in the evenings, documenting different bits and pieces of a particular day, a double page for each day. Back home, I'm now adding colour to each page. It's so much easier to be able to look at the photo on my computer, rather than on the camera display, and by taking the time to paint the pages now, to do some research for the notes to add to the sketches, feels like going on all the walks, seeing all the sights again. 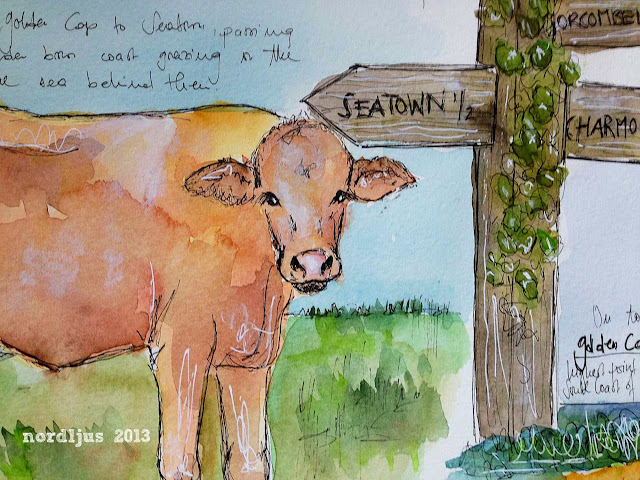 I decided to use a Molesking A4 watercolour journal. The pages are big enough for lots of details, and the landscape format, which I didn't like at all at first (but it seems almost impossible to find watercolour sketchbooks in a normal format) turns out to be quite useful for this kind of sketches. The paper could be a bit smoother for my liking, but it's a nice crispy white, and paper thick enough to flatten out after the paint has dried, which makes sketching so much easier. 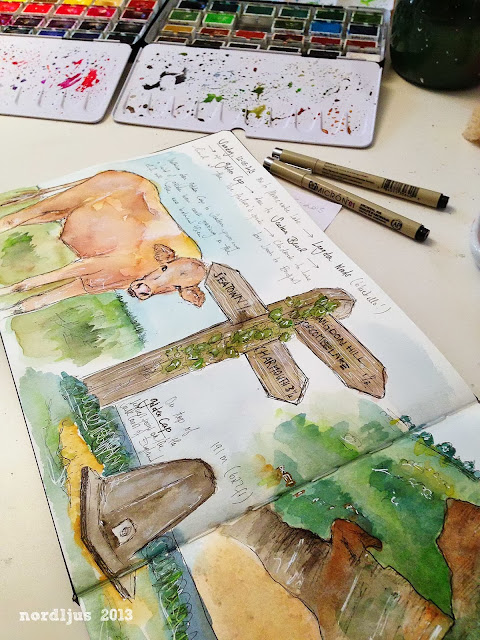 So far, I've only finished painting the first page, but I hope to spend most of the weekends working on the other sketches, and to finish them all before I head off on my next holiday soon. Of course my travel journal will be in my suitcase too.

Linking up to the wonderful Paint Party Friday. Make sure to go and have a look at all the wonderful work of the other party goers. It's always so inspiring.
Posted by Nordljus at 10:34 20 comments:

I finally managed to force myself to go for a Sunday walk today. It's not that I don't like walking. On the contrary, I love going for walks, especially in the woods (and of course on the beach, but that's not much of an option here). But I just usually end up having too many other things to do instead. Or rather, making different priorities. In order to help me get back into a Sunday walk habit, I made a list of benefits, to give it some purpose, such as looking for inspiration for sketches and paintings, and capture beauty in the ordinary with my camera. I've been neglecting my DSLR camera far too much since I got my iPhone, usually using it mostly for holiday pictures. So today, I decided to use my little 50mm lens instead of my everyday 17-70mm zoom lens, in order to get a different perspective. 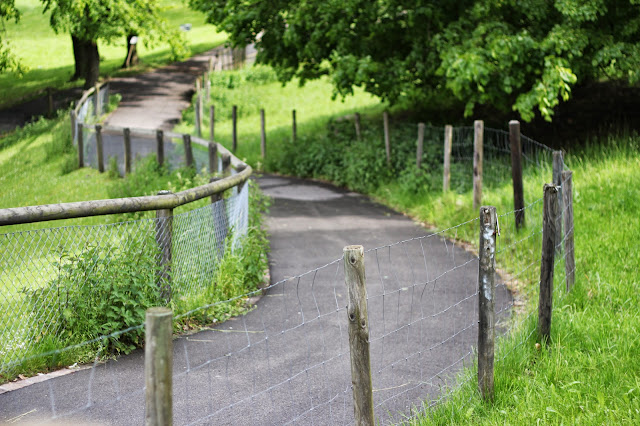 With it's option of an aperture of f/1.8, the 50mm lens allows you  to capture a terrific depth of field, and, according to light, some fabulous bokeh. 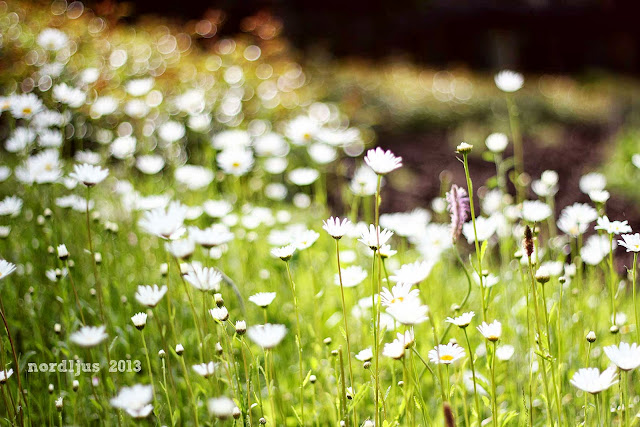 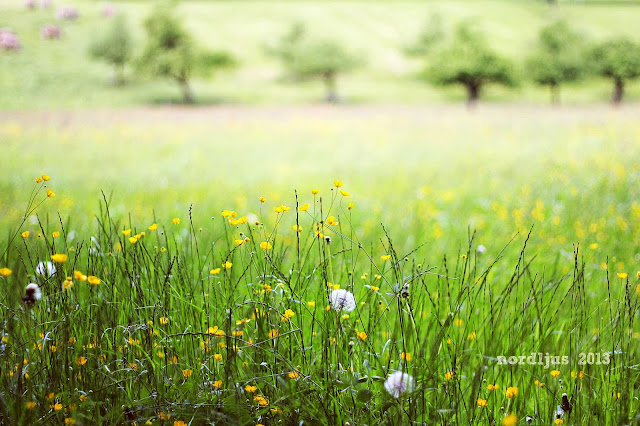 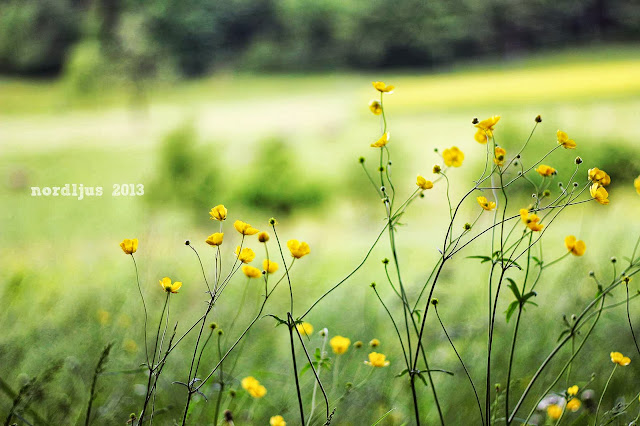 I walked along some beautiful flowering meadows. Who would have thought that common little wild flowers can be so fascinating? 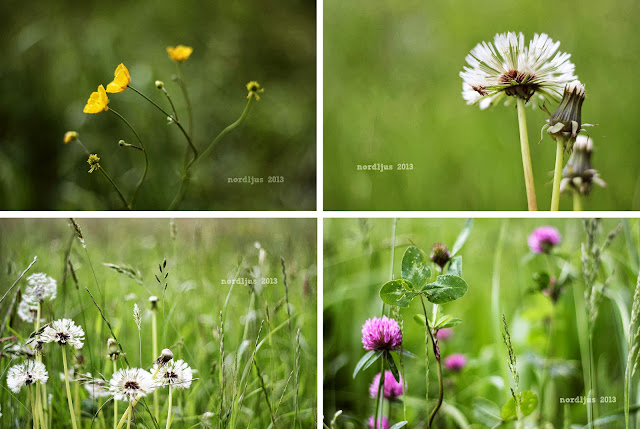 And trought the woods. Unlike the woods in England, where many of them are filled with carpets of bluebells at the moment, the woods here are rather bare of flowers, and instead present mainly a lush green. 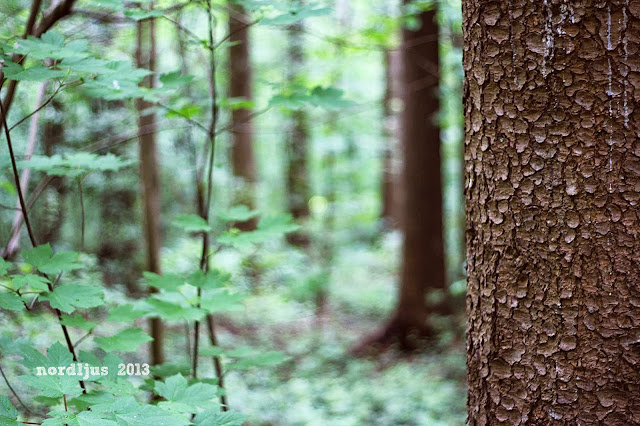 The weather kept changing from minute to minute, but except a very short little shower, the weather stayed dry, and there was even sunshine as well! It was rather windy, though, which made focusing rather challenging at times. 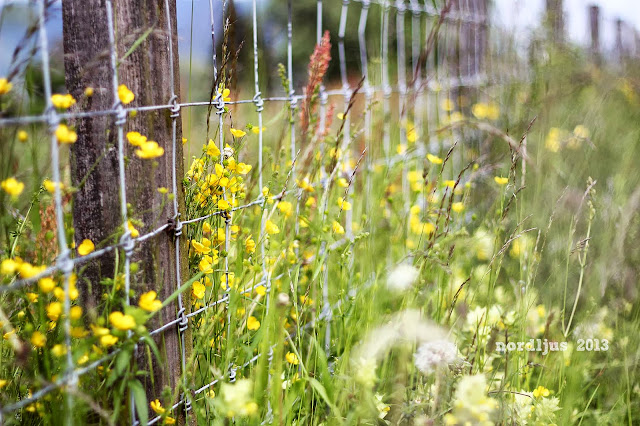 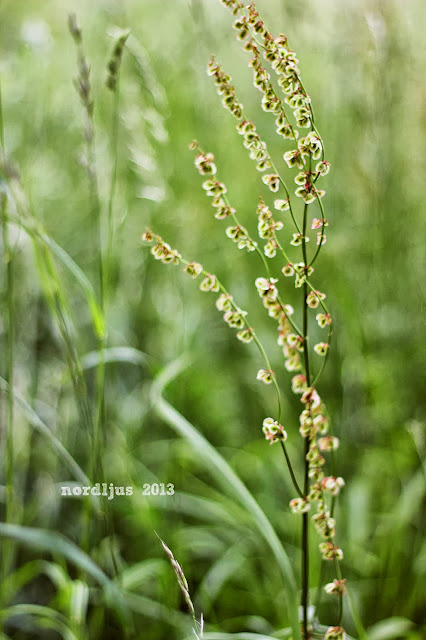 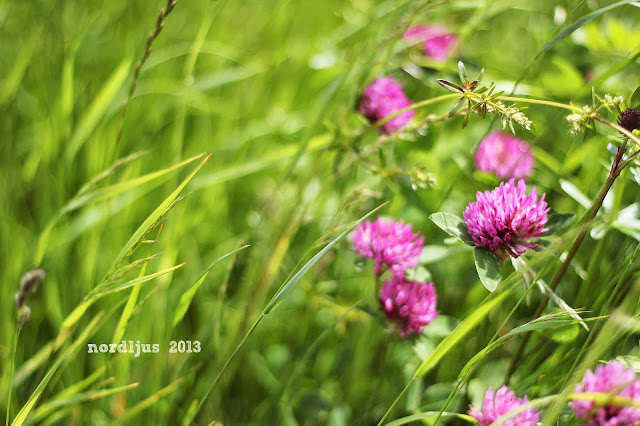 Some of the rhododendrons (or azaleas, I never really quite know what the difference between them is) in some front gardens where in full bloom and just totally amazing. 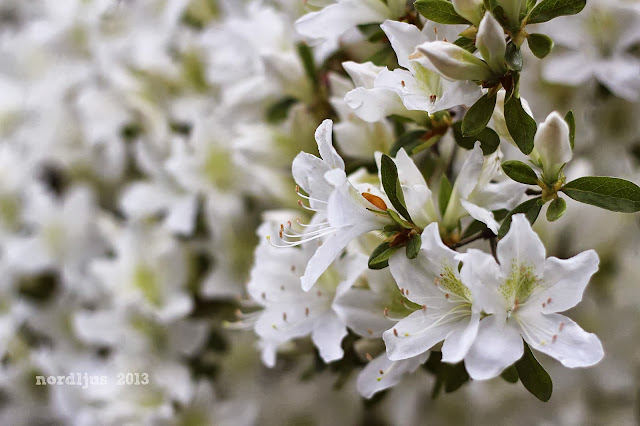 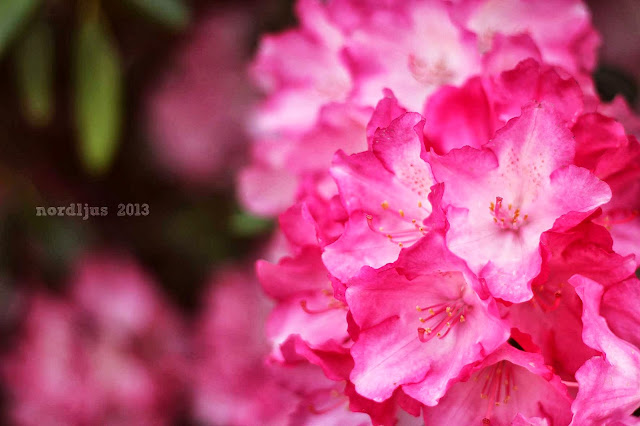 And I even found some bluebells in a grassy patch outside a block of flats. 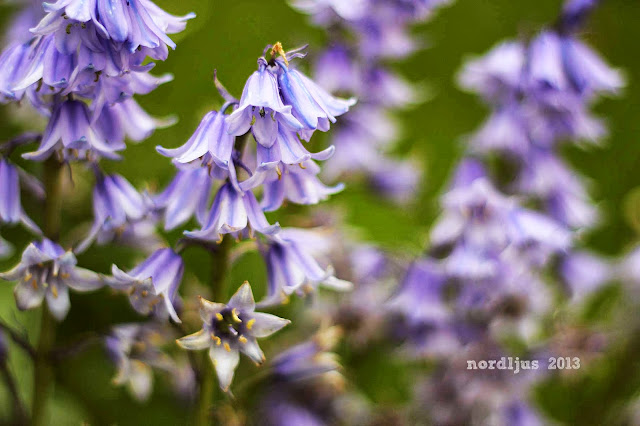 To capture this little fellow, my allround zoom lens, which has quite a good macro function as well, would of course have been perfect. But then that's the challenge; to work with what you've got, and make the best of it. I think he turned out rather well. 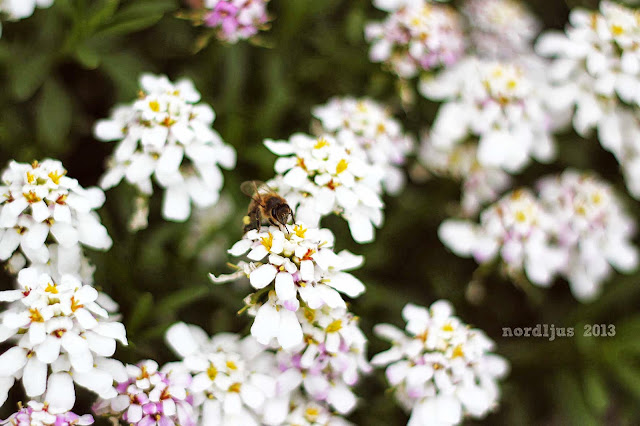 What I love about photography is how it allows you to chose how you look at things. Some of the pictures were taken at places that were not exactly the most picturesque. The gras strips between the pavement and the main road, road, on traffic islands etc. But even in those places, beauty can be found, if you care to look for it. And your camera allows you to focus on just that beauty, and to block out there rest. It allows you to capture and elevate the ordinary, to decide for yourself how you want to look at things, what perspective to choose, and on what to put your focus on.

I really enjoyed my little walk, and 'll definitely try to go for a little Sunday walk again next weekend, and make it a regular habit. But I'll better try not to take 220+ photos again - or I'll end up spending all day with downloading and editing them, and won't have any thime for painting, or anything else, at all.
Posted by Nordljus at 20:35 6 comments:

I'm back from a most wonderful and relaxing 10 days holiday in beautiful Dorset. 10 blissfull days of lots of walking on the beach, on top of the cliffs and through enchanted woods, picturesque little villages, cosy country pubs, stunning views, carpets of bluebells, and simply irresistible, delicious cream teas.


I took loads of photos (will try to share some of them here soon), and I also did some sketches for each day on some of the evenings, but they are still in their early stages, and will need much more work yet. I'm hoping to make some time for working on them during the weekend, but I just can't wait to be back at the party again. So for today, I'm sharing a little project I did just before I left - a little bit of TeaArt in my trusted Moleskine art journal.

It all started with some tea bags of sleepy tea from one of my most favourite brands of tea, Clipper Teas (which coincidentally happen to be based in Dorset!) I had left lying around in the kitchen. 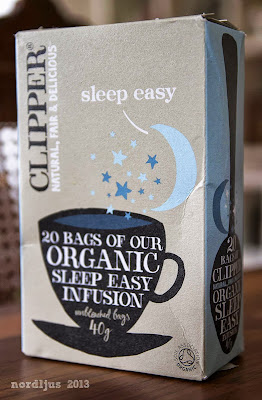 When I wanted to throw them away, I noticed the beautiful warm brown colour of the dried bags. Wouldn't it be lovely to use them for some background for a journal page, or something? So I kept saving the tea bags. 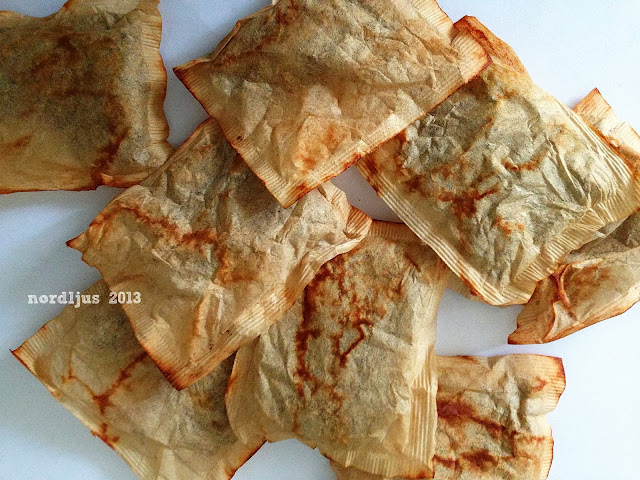 Once I had enough, I carefully cut them up, ... 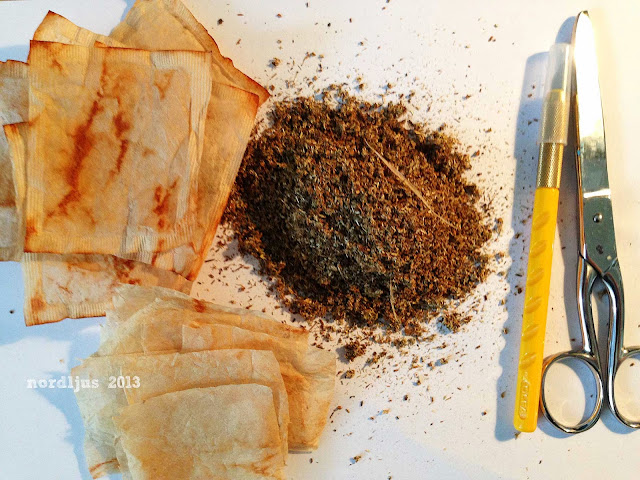 ... pasted them unto a page in my Moleskine journal, added a bit of white to bring out the textures, and finally added a little, simple sketch. A tea pot and cup just seemed the obvious thing. I really like to use Moleskine sketchbooks for art journals. They have a good size for smaller, less elaborate pages. I like to use them most of all as a kind of reference for different ideas and techniques. They are my little idea collections, which I occasionaly get back to for ideas to use for a biger painting, and they are also my little documentation of some of my little experiments and ideas. I love all the layers of the different pages when the journal begins to fill up. 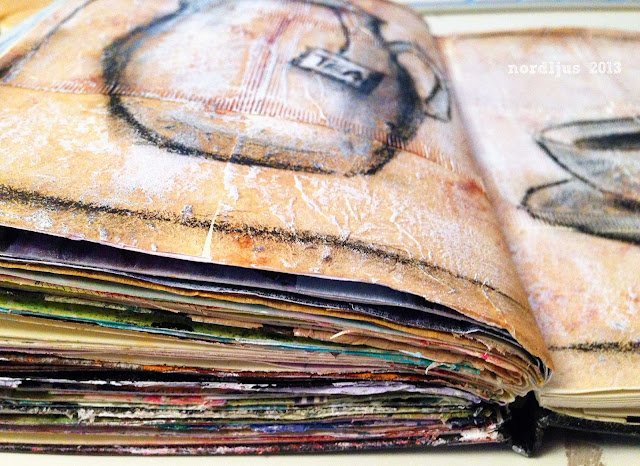 Linking up to the wonderful Paint Party Friday again. I can't wait to go and see what everyone has been up to while I was enjoying my holiday! Have a wonderful, creative weekend everyone! 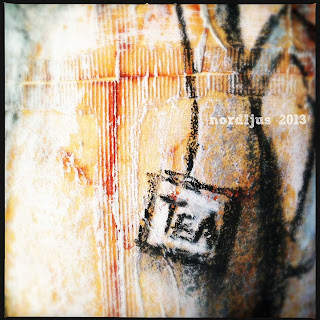 Gone to the beach... 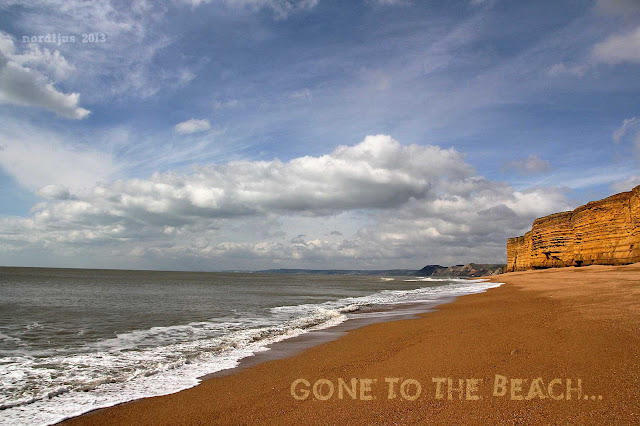 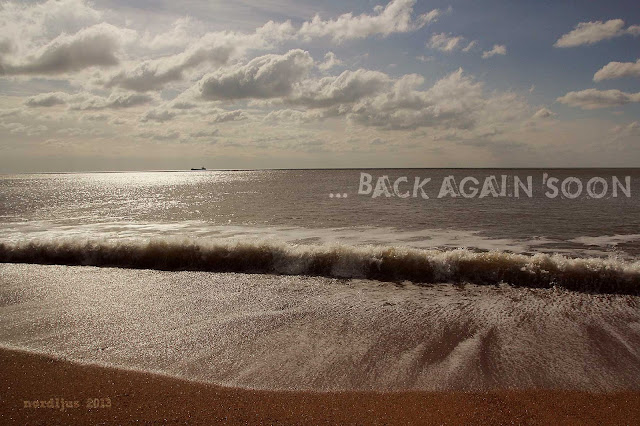 Patient owls, and some sketches waiting for colour

This week's a bit of a mad week, and there hasn't been much space for painting, or rather, none at all. And I'm so behind with colouring in my lunch- and trainsketches. And I've neglected them a bit too, to be honest. But that was mainly because I spent my train journeys and lunch breaks with reading Harold Speed's The Practice and Science of Drawing. Written in 1917, but still a fascinating read, and a most inspiring one too.

But anyway. I did a couple of lunchsketches in the past few days, and I found a finished sketch which I haven't blogged about yet. So these will have to do for today's Paint Party Friday. I was thinking about giving the party a miss altogether today, but to be honest, I could do with the "company". So here I am, with my row of colourful owls patiently waiting for news,... 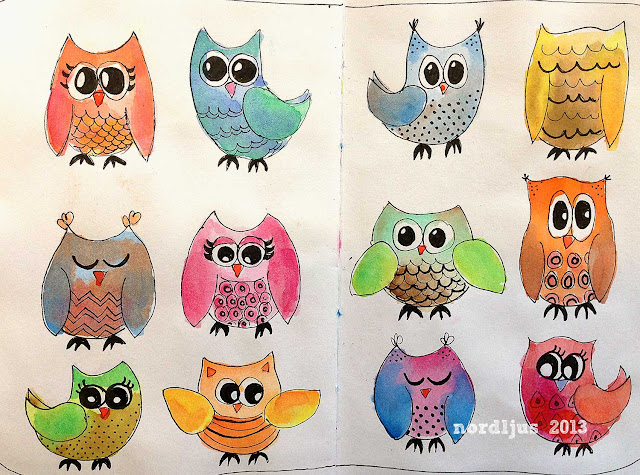 ... and a few sketches patiently waiting for colour. 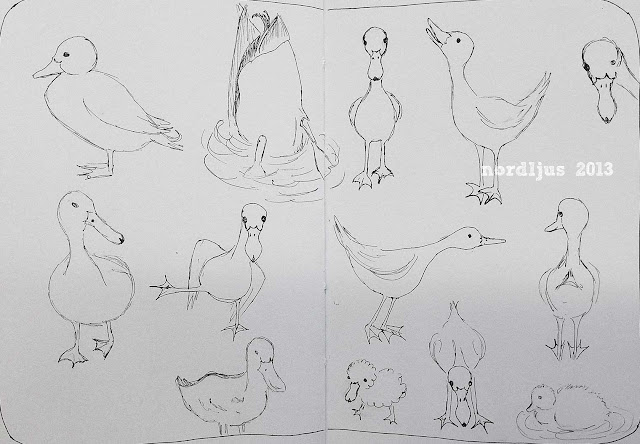 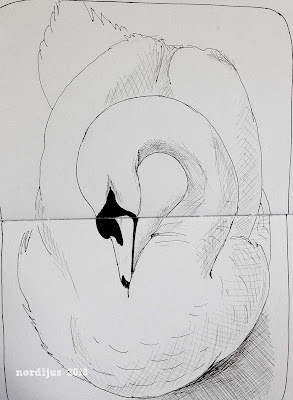 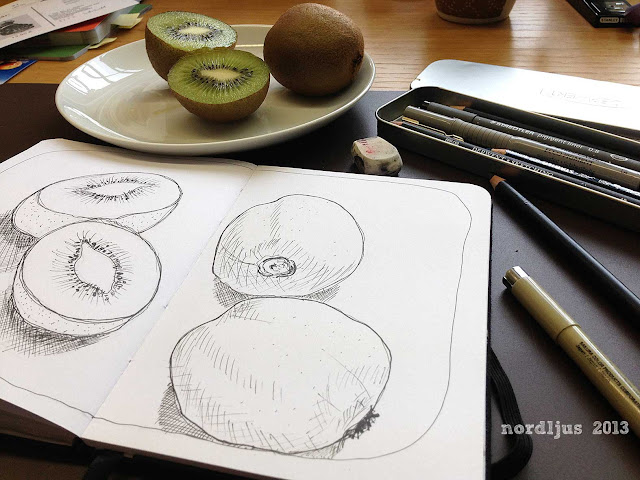 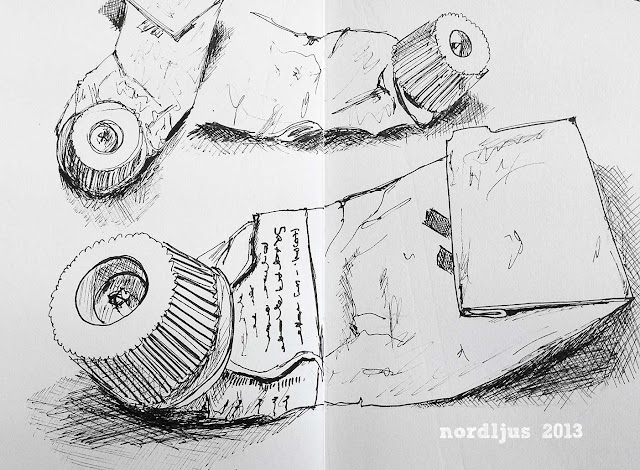 I hope to have some time, and inspiration, to colour these sketches, and to do some painting too, over the weekend. But we'll see. I'll definitely try to visit as many blogs as possible, but my mind's a bit preoccupied at the moment, so I apologise in advance if I'm not going to do a very good job with keeping up. But I'll do my best.