My "lollipop" trees are finished. Or so I think. At least for the moment. (And I promise this is the last time I'll post them here).

While I liked the patterns and colours, I just wasn't 100% happy with it. It didn't feel right yet. So I added a layer of white over it, but it was still not right. At the end, I used some oil sticks and generously went over it all, adding a creamy layer while allowing some of the patterns of the layers of acrylics underneath to show through. 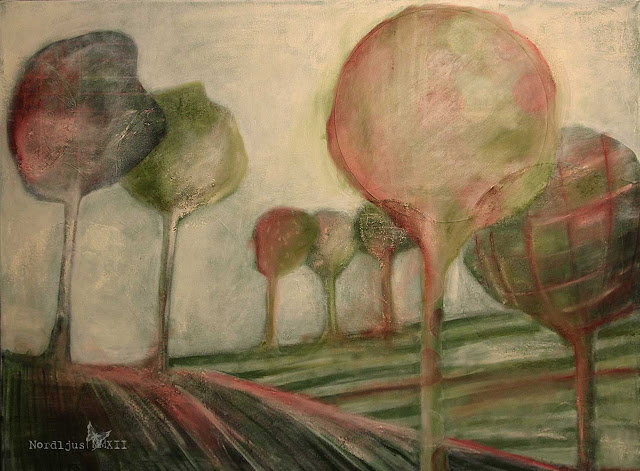 It's hanging in the living room at the moment, and I keep looking at it, adding/adjusting a little bit here and there, and thinking about whether to add some shadows or not. It's not always easy to know when a painting is finished.


I went to see the documentary film "Gerhard Richter Painting" at the cinema (watch a extract here) in my Christmas break. Richter often lets his paintings hang for some time between each step, before deciding what to do next, letting them evolve, and often changing them completely in the process. At one point, the film maker asked ihm to explain when /how exactly a picture was finished. He tried very hard to give her a satisfying answer. She wanted a straight, logic explanation, and he simply couldn't give it.

I could understand his struggle. When is a picture finished? In my opinion, or rather personal experience, there are two possible ways to finish a painting:

Sometimes, the second can result in the first, after some re-working or over-painting after some time. But at the end, you can't really explain when a painting is finished. It's a process, which sometimes can take weeks, months, until you come to the point when you just know, one way or another, that it's finished.

How do you know when a painting is finished?