A study in orange

The colour for January for the Creative Colour Challenge is orange, and we're supposed to create something using only this colour. I decided to do a little colour study, mixing different oranges, and creating a whole page of orange, including some information about this colour.

According to the  book on colour in which I looked up orange, it is the least favourite colour after brown. Now while I wouldn't really want to wear anything orange, I've always quite liked the colour, especially for painting. It is so vibrant, and strong, and juicy, and it can make bright and happy colour accents. 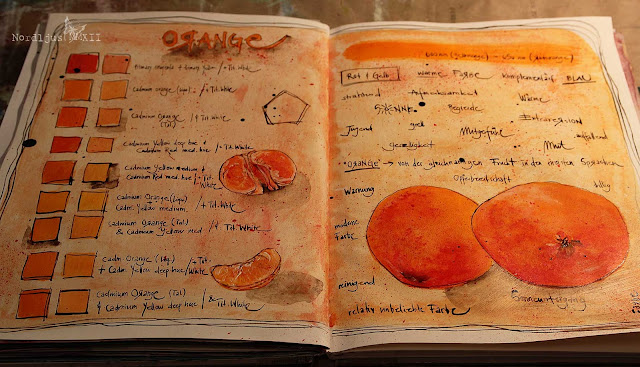 Orange is between yellow and red, it's complementary colour is blue. Its geometric form is the pentagon, its position on the spectrum lies between 600nm (yellow orange) and 650nm (red orange). It is a modern colour, up till the end of the Middle Ages, pure orange was not used in European painting. It was regarded as a poor and unsuccessful form of red, and therefore avoided. It is named after the orange fruit in most languages.

It's connotations are: youth, courage, warmth, sun, extraversion, warning, caution, sunset, sociability, sympathy, compassion, health, desire, lust, willingness to make sacrifices, autumn. Orange is radiant, bright, loud, glaring, garish, bold, striking, noticable, cheap, purging. Orange is the colour of health, it is purifying and is good for one's nerves. Hyperactive, nervours and choleric persons should avoid the colour. Orange is an "opening" colour, it promotes the capacity for enthusiasm and releases blockades.
Posted by Nordljus at 18:03