Can you believe it's September already? What happened to slow and boring August? Well, it wasn't very exciting but it was certainly not slow. And with the school holidays, it was nice and quiet. Now it's all busy and full of people everywhere again, but at least that means that summer is almost over at last. And I've got some exciting trips coming up too to look forward to.
But first some new pens, lots of brown pens. I love brown pens, but finding the right brown is difficult. The Art Line Multipen is definitely my favourite shade, and the Pilot G Tec is a much loved pen. Very strange, though, that the shades differ so much with the different tip widths in the Artline Calligraphy pen. 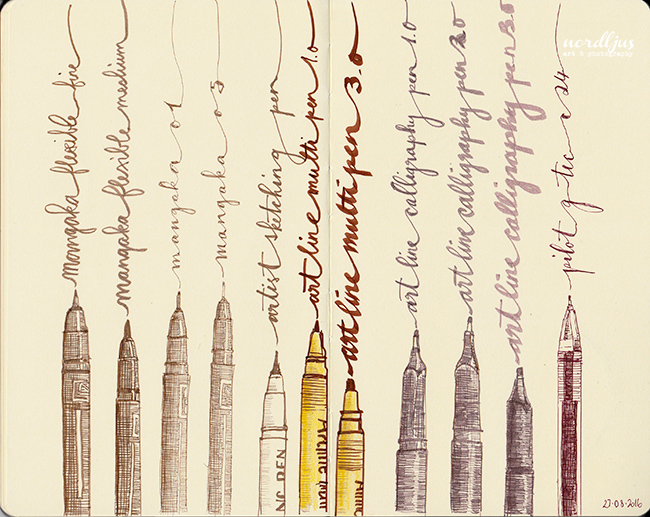 I watched a documentary about Hieronymus Bosch the other day, or rather, about the museum in his home town ’s-Hertogenbosch, which wanted to celebrate Hieronymus' 500th anniversary with an exhibition. The documentary followed the museum peoples' search for suitable artwork (the museum itself doesn't own any of his work). There are only about 25 works by Bosch, and since it was common for artists in the Middle Ages to have their own workshop with apprentices and other artists, working for them, it can often be difficult to determine if or which parts of a piece was painted by the master himself or by his employees, and sometimes the workshops continued to paint in their master's style even after his death. The methods to find out are fascinating. A dendrochronologist (someone who dates wood) was able to proof that a certain painting was definitely not painted by Bosch, as the tree that the panel was made from was cut after his death. How they are able to determine the exact year of when a certain tree was cut in the 16th century is quite beyond me!
The museum then received an e-mail form an amateur art historian who thought that a painting he had seen in a museum somewhere in the US might be an unknown Bosch. The curators travelled to the States and examined the piece and eventually came to the conclusion, much to the joy of the museum, that it was indeed a real Bosch. One of the methods they used was comparing Bosch's way of painting a staff. Rather than painting the staff itself, he just added light on one side and shade on the other, resulting in an optical illusion of a staff. Of course we know about how to play with and use light and shade these days, but how often would we end up actually painting a staff instead of using this simple trick? I thought it was fascinating, anyway, and wanted to try it out in my sketchbook, to see how that would work, just with pencil. It works perfectly. And it's definitely something to remember. We can indeed still learn so much, if not everything, from the old masters! 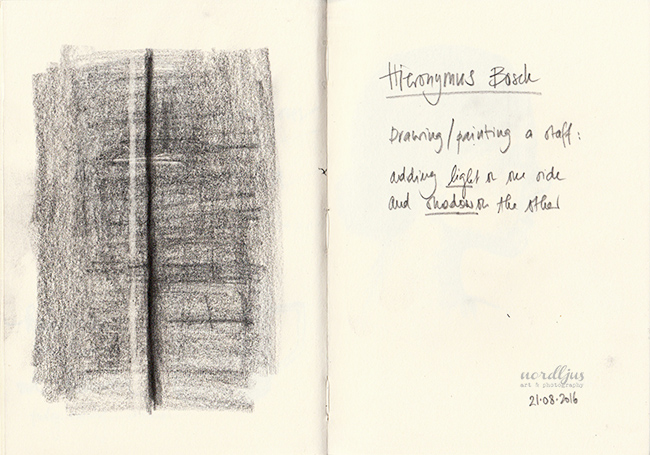 I have also continued my almost daily drawing practice, although I had a bit of a lazy weekend, as with temperatures at around 32 degrees Celsius, all I could do was lie on the sofa and move as little as possible. I could really do without this late summer heat wave! I found some acorns lying on the path on my way to work earlier this week and picked them up to draw them in my lunch break. I'm always happy to see them. A sign that although it's still, and uncomfortably humid, at the moment, autumn is finally around the corner. I like drawing them, they have such nice shapes, and the shapes then inspired me to do some lettering with them in my lunch break yesterday. 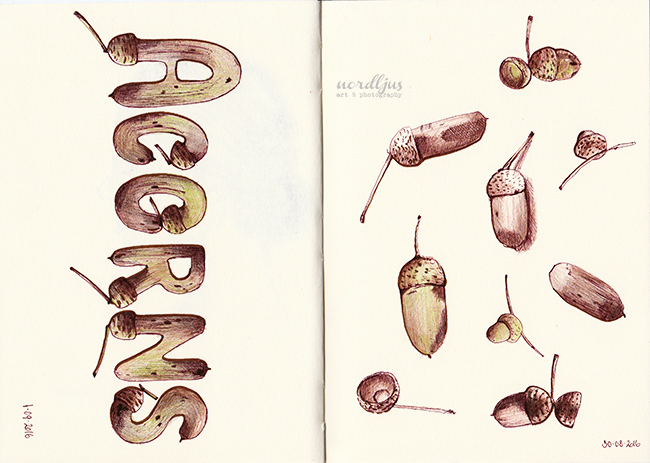 I have drawn a few new tea cups too. There's still room for improvement with some of my oval shapes there... 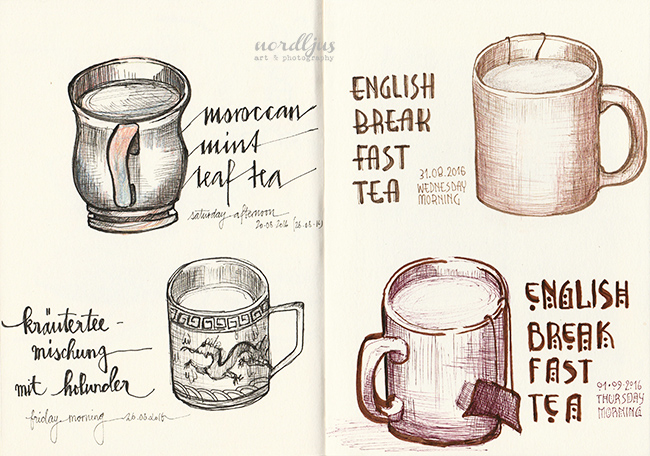 I'm thinking about doing a portrait drawing challenge. 99 portraits or 100 portraits (actually I started that one a few years ago...), or just 50 portraits. I'm not very good at keeping up with a challenge, and a daily challenge is a bit too much, but on the other hand I think these challenge are a good way of practicing something specific that you want to improve on. 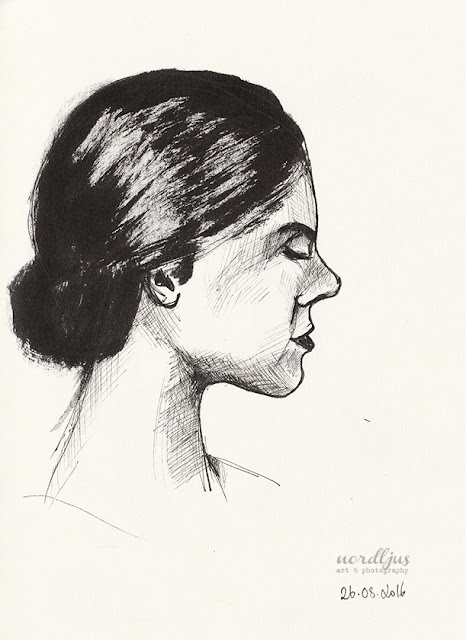 Next week, I'll be travelling to Stockholm for an extended weekend. From Friday to Sunday I will be in beautiful Vaxholm for Orly Avineri's The Visual Journal As Sanctuary workshop. I'm really excited about it! I'll also have a few days of wandering around and re-visiting favourite spots in one of my most favourite places, Stockholm. I lived there for a year many years ago, studying at Stockholm University, and going back there always feels like coming home. My only problem is packing my suitcase. So much stuff we have to take for the workshop (and that I'll be missing the last episode of The Out-Laws)! Three different kinds of gesso (white, black and transparent), and it's all rather bulky and heavy. 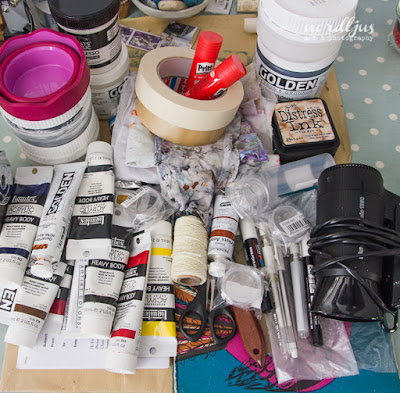 And I just can't make up my mind about which colours to take. I selected some colours and then put them all down on a journal page, thinking that this way I could choose which one to take and which one to leave at home. But with every one I put down, I thought, ah no, I definitely want this one! I'll have to try and reduce their number over the weekend! I also bought some small empty containers to fill with some of the paints so that it won't get too much. And I discovered Posca pens! Well, the white pen, anyway. I'm always looking for white opaque pens, and this one I just love! 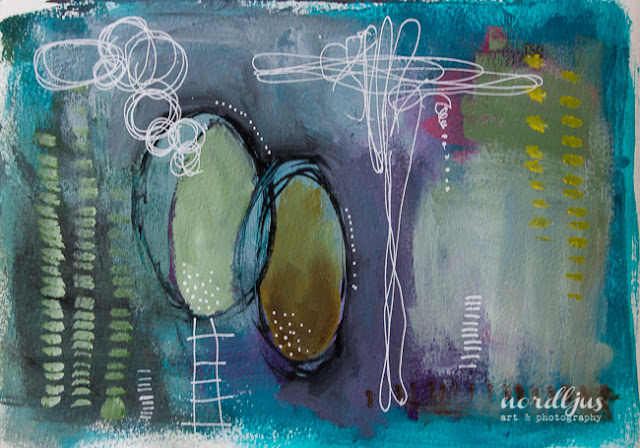 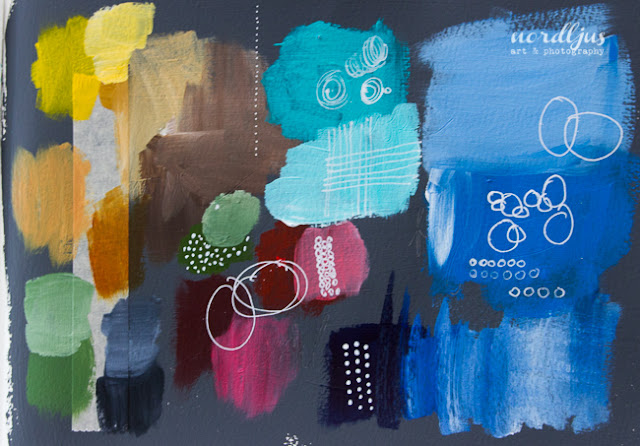 I won't be posting anything next Friday, as I'll be art journaling with a bunch of lovely people in beautiful Vaxholm. But I hope that I'll have plenty to show the week after.
Posted by Nordljus at 07:11