The first two assignments of the Creativity Boot Camp Spring Training were more or less easy and comfortable enough (I'll write a post about it tomorrow). I love getting messy with my acrylic paints and especially using palette knives to create layer upon layer of texture. Drawing is more of a challenge. It's something I've been putting off for ages, but I'm desperately wanting to finally learn it. The third assignment now definitely is rather out of my comfort zone. To move. To dance. To free the mind by freeing the body through movement.


I've never been much of a dancer, even though I would just love, love, love to learn ballroom dancing. I love the dance band music of the 1920s and 30s, and I would so love to learn all those dances and moves. But it involves persuading someone to go to a class with me, and that already makes it too complicated.


Over 15 years ago, I walked into a jazz dance class in the gym/dance studio I was going to at that time by mistake. I had wanted to go to some aerobics class or other, and mixed up the rooms or buildings. When I discovered that I was in the wrong class, I wanted to make my excuses and leave. But before I could open my mouth, the instructor, sounding as he was just about to burst into tears, welcomed us (there were about 5 others apart from me) and thanked us for coming and showing him our support. I really had no idea what was going on. I think he felt that the studio wanted to get rid of him, or there had been some quarrels, or something like that. I don't know. But I just didn't have the heart to say "oh, I'm sorry, actually, I didn't really want to come here in the first place, I just got confused with the rooms" and leave. So I went through with the class, and I hated every minute second of it. It was just not my thing. And I thought that really, dancing just wasn't my thing. Although come to think of it, the reason why I was actually going to that studio was because I was going to Afro Dance classes with a classmate, and I actually really loved that!


So when I read the assignment, I thought "oh dear. dance". But I was determined to give it a chance. There was a video for inspiration, and it really absolutely inspired me, and actually just made me want to get moving and dancing. I had it on all evening, and again and again, started to move, to dance, enjoying it immenesly.


I tried yoga twice, but it's really not my thing. But this yoga trance dance - love it! I will download that song (Nataraja by Dum Dum Project) and put it on my MP3 player (which unfortunately seems to be half broken, though).


The only downsides to this assingment was that a) my fitness level is at a such an appallingly low leven, that I was completely out of breath halfway throug the song, and b) I couldn't let go completely because I had to keep one eye open to make sure I wouldn't crash into my bookshelves. There isn't really enough space to dance in the flat. When sitting down at my desk, desperately trying to catch my breath again and watching the video for the 100th time, instead of dancing myself, I tried to dance on the paper instead (a good drawing excercise as well). I liked the invitation, order, command, challenge "when you're ready, leap". It's a good mantra for a lot of things in life, not just dancing. 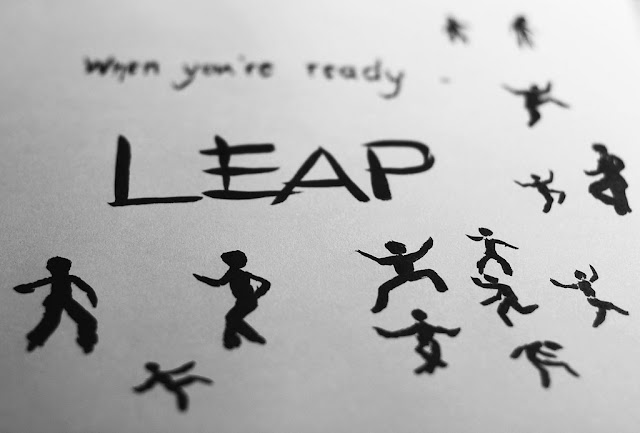 I really enjoyed it and I've seriously considered getting up very early one morning at the weekend and find a quiet place outside to dance. Of course I've been thinking about what, if someone happened to see me, they would think of me. "She's must be mad, crazy, very strange". But then, what would I think if I saw someone doing this? I wouldn't think they're mad. I'd think how wonderful it is to have the courage to do it, and not thinking about what others might think, how liberating it must be. I'd admire them, and regret that I've so many barriers inside me that prevent me to do it myself. But maybe it's high time to break down those barriers, and stop worrying and thinking too much, especially about what others might think.


But I've already taken the first steps on that path. I know that a few months ago, I'd have found this assignment much more difficult. Funnily enough, I've actually just last week thought about taking up dancing. I know that I should excercise more and do something for my fitness. Yoga's out, so are gym and crowded aerobic (or whatever it is one's doing now) classes. So I came up with dancing. I even looked up classes for tap dance in my area, and found a studio that looks nice. I think I'd like tap dance. It's 1920s/30s, it's  Fred Astaire and Ginger Rogers, it's Dance Bands, it's movement, energy, rhythm, fun, joy, and noise. I like the noise bit especially :)