A Little Bit of PSE Processing

Now this is probably old news for most of you reading this post, but I thought I'd post it anyway. Because I've been learning a lot about PSE8, processing and working with textures in the last few months and I always love to see how others do it. So I thought I'd share some very simple processing today with you, which l learned in those past few months.

I took some pictures of a bunch of lovely purple tulips I bought earlier this week. Actually, I did this for the Mastering Manual Mode class, where we're looking at shutter speed this week. But I'll write about this in another post.

Back to the processing. You can't really call it a tutorial, there are so many much better and cleverer ones around by people much more experienced than I am, knowing far more tricks. But it's always a learning experience nad there are so many different ways of doing things and achieving effects, that I think it's always interesting to see how others do it, even if it's very basic. You might always discover a little trick or step you didn't know yet. Happens to me all the time (but then I'm such a beginner anyway so it's not really surprising ;.) ). So this was the original picture:


What I didn't like about it were mainly the bits of green on the left side, where I had been too lazy to remove the plant standing on the window sill next to where I placed the tulips for the image. But luckily, I had learnt by now how to remove this things by using one the sponge tool to remove saturation and dark bits. I actually brushed away other parts of the background as well, especially the dark blue part at the top right corner, which at the end left me with an almost white background. Perfect for adding a texture. But before that I did a little bit of levels adjustment.

I then looked for a texture which would match the colour of the tulips, some soft shade of purple or lavender. I found the one I wanted in the "Baking with Mom" collection from Rita at The CoffeeShop Blog (this is a most wonderful blog which you have to check out if you don't know it yet. It has loads of wonderful textures, actions (which I still haven't worked out how to install *sigh*) and helpful tutorials). The "favourite apron" texture was just the right shade of purple/pink for my image.

So here's a screenshot with all the levels. I always like to see these levels, and one of the very first things I learned in one of the e-courses was that when you save it in Photoshop's PSD format, it means that you're levels are preserved. I hadn't actually known that and had always just saved my images as JPEG after having done some adjustments (which at the beginning were only levels, saturation and contrast adjustments, because that was all I was able to figure out myself). I didn't really know what to do with that PSD format, as you couldn't look at the picture anywhere else than in Photoshop. My goodness, how ignorant I was :-). Anyway, here's the screenshot: 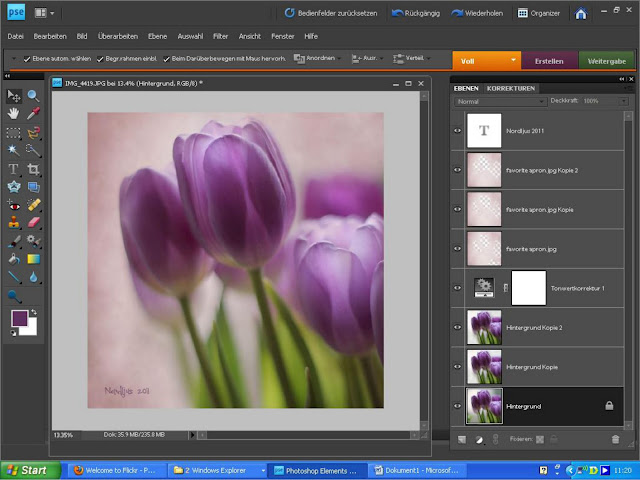 As you can see I also cropped it at one stage of the process. Actually, I did that after all the texture levels, which means that I might have cut off some of the texture. But in this case it doesn't really matter (and I haven't really figured out yet if PSE automatically resizes the texture if you crop it afterwards or if some of the texture is actually just cut off). Anyway, the cleverer bit would of course be to crop it before. As you can also see, I removed some of the texture on the tulips in all three texture layers. Apparently, in the full version of Photoshop and also in the latest PSE version 9, you can just add a layer mask which allows you to remove texture without actually erasing it, which makes it easy to put some of it back again if you removed too much. There's a trick for PSE8 and lower to "borrow" a layer mask but I find that in most cases, just simply erasing the texture is okay. And if you made a mistake, you just have to undo it and start again.

And finally, the finished picture. I quite like how it turned out :-) 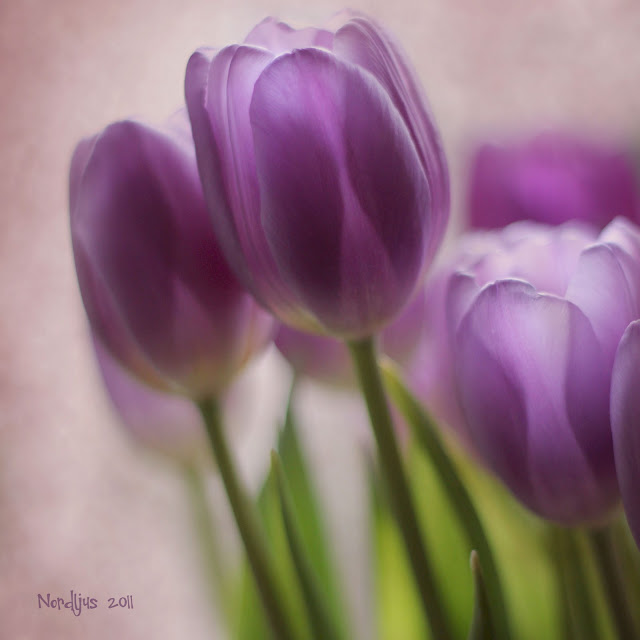 Have a wonderful and inspiring Sunday!
Posted by Nordljus at 12:09