Last week, I came across the new Flickr group 1000 cranes for Japan (this is just one, there are more of them, just have a look around). The idea is to make a virtual chain of 1000 cranes to show our support for Japan and the people affected by the terrible events of the last week.

The crane, one of the holy creatures and said to live a thousand years, is a symbol of luck, good fortune and longevity in Japan. According to ancient tradition, the person who folds a 1000 paper cranes is granted a wish.


Today, the 1000 paper cranes are also a symbol of the peace movement and opposition to nuclear weapons, after the twelfe year old Sadako Sasaki died from leukemia in 1955 as a result of the of the atomic bombing in Hiroshima, where she lived, in 1945. She started to fold a thousand paper cranes in hospital before her death to fight her illness (there are different versions as to whether she succeeded to complete the 1000 cranes or not). 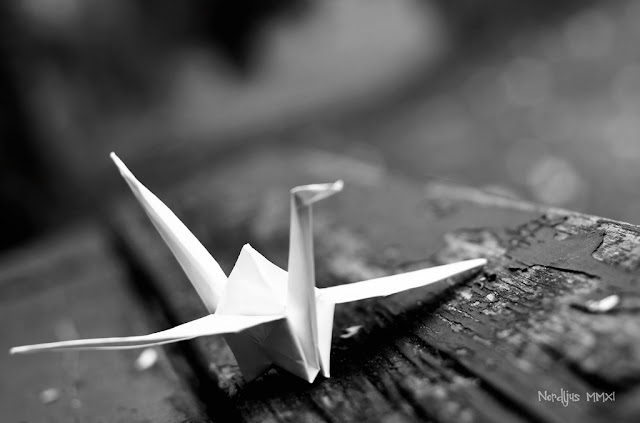 Seeing and reading about the suffering of the thousands of people affected by the earthquake and tsunami and the threat of a nuclear catastrophe in Japan in the news leaves one feeling completely helpless. It is impossible not to be shocked by the events and feel deeply for the people, but there is little we can actually do to help from afar. One thing we can do, however, is to show that our thoughts are with them. And a little paper crane is one way of doing so.


You'll have no problems finding tutorials to show you how to fold a crane online. For example this one (in German): http://www.origami.ch/kranich/kranich.html. The very last step made me smile: "if it doesn't look like this, you've went wrong somewhere". Or look here or here, or just google it and choose one that suits you and start folding.


One of the things the events at Fukushima have shown me is how little I know about things I have come to take for granted (and I'm sure I'm not alone here) and how we depend on things we don't really know much/enough about and ultimately, over which we don't really have much control, at least not when things go wrong (although we humans seem to have an undestroyable illusion about being able to control nature, despite everything that went wrong in the past). I didn't really have much of an idea about how a nuclear power plant works. We are so used to turning on the heating when it's cold outside to have a warm home, to turn on the lights, the telly, the water kettle, to get hot water out of the tap without really thinking (and even knowing) much about it.


The threat of a nuclear catastrophe in Japan has raised heated discussions about nuclear power all over the world. Here in Switzerland, any pending plans for developments and constructions of new nuclear power plants have been stopped for the moment and maybe even forever. There's talk of turning off the oldest of the five plants in Switzerland at the moment and even about giving up nuclear power at all. That it is possible to do without shows, for example, Austria, where nuclear power is forbidden by law since 1978, after a national referendum (although it should be added that although they don't produce any nuclear power themselves, they do import/use some). I think that nuclear power will be a thing of the past in Switzerland sooner or later (probably rather sooner than later).


But what we need to be(come) much more aware of (again) is about how we use energy, and where it comes from. We have become much too accustomed to having enough electricity whenever we want it, and often use it even when we don't really need it and just waste it. It's high time we start rethinking our energy consumption, each and everyone of us.
Posted by Nordljus at 13:10