An inspiring art retreat in Scotland, and a relaxing holiday in Dorset

I am back from a 2 1/2 week holiday, which included an inspiring one week art retreat in Scotland, a relaxing 10 days at the opposite end of the isle, in Dorset, and my so far worst journey ever.

So to get the moaning out of the way, first: another unpleasant "joy of travelling by air" episode, the worst ever so far, even worse than the "June episode". After an inspiring week in Scotland, I was to fly back from Aberdeen to London on Saturday noon, and from there travel on to Dorset. I had booked my flight and my train ticket, and was looking forward to arrive in Dorchester by 8pm. At the check-in counter, I was then informed that the plane was full, and that since I hadn't checked in online earlier, there was no seat available anymore. What??? What about having booked my seat for that particular flight a good 4 months earlier, and having paid about £150 for that leg of the journey alone?? Didn't that count for something? Apparently not. Unfortunately, it seems that it is common practice for airlines to overbook flights and count on a quite substantial number of people not showing up. As it so happened, it was holiday season for many people, and pretty much every one showed up. As it turned out, the whole disaster had already started the night before. From Friday evening to Saturday afternoon, all flights were overbooked. The practice adopted by British Airways in this a case was come first serve first, and dozens of people, who, like me, hadn't been able to check in online the day before, found themselves stuck and unable to travel as planned. Long queues of people, their nerves frayed to pieces, stressed out, shaking, close to tears, their holidays ruined by this whole experience, gobsmacked that something like this could happen with what they had believed to be a "proper, decent" airline... At least I only had a train to catch in London, but there were many people with connecting flights on to the States, to Australia and other far away destinations, who didn't know if and when they were able to get to their destinations.
I was eventually booked to a much later flight than my original midday flight, spending 6 hours at Aberdeen airport. Wen I finally arrived in Heathrow, a member of staff at the bus information insisted that it was not possible to buy a combined coach and train ticket, and then, after I told him that I had indeed bought said combined ticket many times before at the central bus station in terminal 1-3, suggested I might want to go there to get one. I did not, as the central bus station is a good 5-10 minutes bus or train journey from terminal 5, where I was. Eventually I found my way to the National Express office at the very end of the terminal, where I obtained my combined bus and train ticket, pretty exactly at the time when the bus was due at 7.50. So another hour of hanging around and waiting at an airport. When I finally got on the 9pm train at Woking, it was packed with people of all ages, many of whom, it seemed, coming from a football match. It was not really a very pleasant journey after an already utterly unpleasant day of travel, and after changing coaches twice, I eventually found a seat where I felt comfortable enough for the remaining 40 minutes. I have never been gladder to arrive at Dorchester. At about 11.30pm, I finally dropped by bags ton the floor at Ns, utterly exhausted after a good 15 hours of travel. What a day.
This was my first time flying with British Airways, and most probably my last. I have absolutely no intention of every using them again, if I can help it. I am well aware that they are not the only airline that overbooks flights, but there are other ways of dealing with such a situation.
Thankfully, the other three journeys all went smooth, including my flight back from London City Airport on Tuesday evening, which was a pleasant surprise. Seriously, I cannot remember the last time my flight back from London to Zürich wasn't delayed or even cancelled, such a rare occurrence this seems to have become be these days... 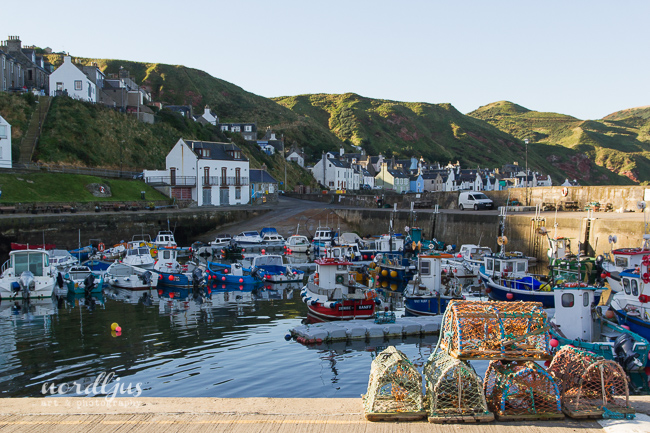 But on to more pleasant things now. Apart from that one day, I spent a fantastic, inspiring holiday. The first week was an art retreat in the northeast of Scotland with Gillian Lee Smith, in the charming coastal village of Gardenstown. Surrounded by stunning views of the cliffs and the sea, and with no mobile phone signal and limited internet access, it was the perfect place to spend a week of making art. I had been a little apprehensive about spending an entire week with more or less complete strangers - and sharing a cottage with some of them - but my fears were soon gone. It was a fantastic group of women, and it was a great pleasure to spend so much time with them, learning their stories and getting to know them. We arrived on Saturday evening, and had Sunday off to explore the surrounding and rest. As happens so often when I travel, the sky was blue and the temperatures comparatively mild. Indeed, it was sun and blue sky, and not even the tiniest drop of rain, the entire week I spent there. There are some lovely walks either side of Gardenstown, one to the old St John's Kirkyard, with fantastic views over the bay, the other to the old fishing village of Crovie. 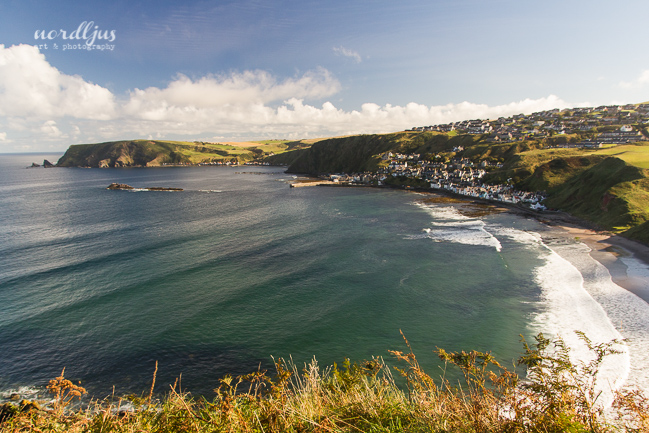 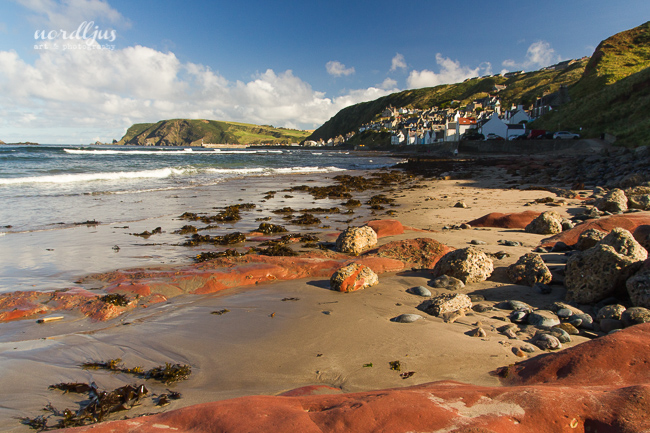 On Monday, we started working. Drawing, with charcoal and pencil, landscapes, portraits, oil bars, painting, acrylics, pastels... I had two sketchbooks I worked in, along with the bigger sheets of paper, an A5 Moleskine and an A4 Seawhite travel journal. Here's a few pages from my Moleskine, that I managed to scan so far. The A4 is too big for my scanner, and I haven't yet any good pictures of the bigger works I've done. On Monday, we went outside to he harbour for some sketching. 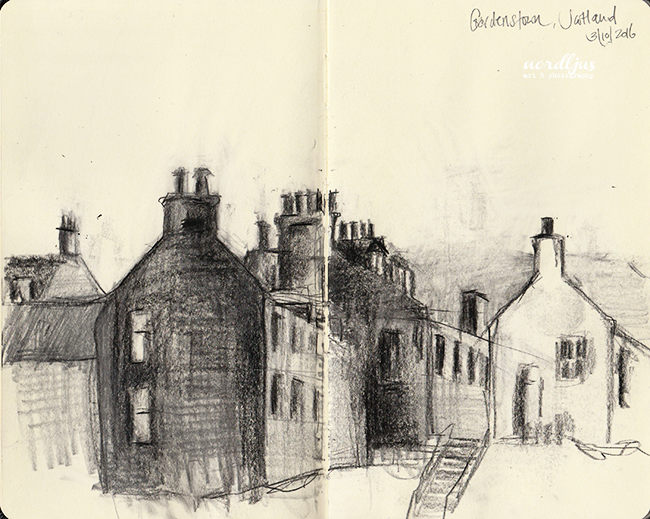 There was a jar full of sea shells and other treasures from nature and the sea in the studio, and I did a quick sketch of this lobster or crab claw. 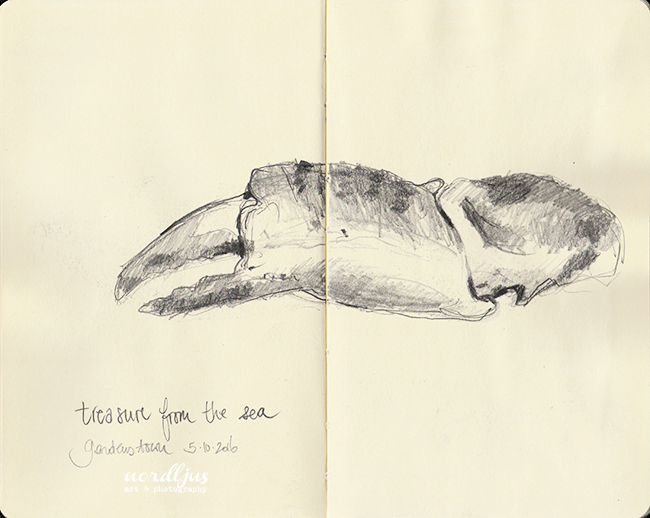 Spending a little time mixing colours. I liked those mixing palettes they had in the studio. A good mixing palette is something that's been on my to get list for ages. 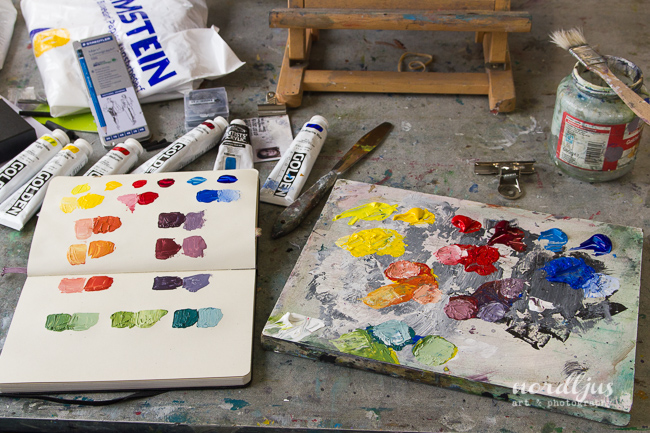 I'll write some more about my week in Scotland soon, and I've got some more photos to share from my 10 days in Dorset too - we spent another fabulous day  at one of my favourite places there, Brownsea Island - but I've only been home 3 days now, and straight back to work, and I still have many photos, journal pages and thoughts to go and sort through.
Posted by Nordljus at 07:21