I only discovered drawing with fountain pens at the beginning of this year, and I'm still trying out different pens and inks to find the 'perfect' ones. For the past few months, I've been using mainly three inks: Platinum Carbon black, Noodler's Brown and Noodler's Lexington Gray. I like these three colours, and I especially loved the Platinum Carbon, as it dries almost instantly and is a nice rich black. But because of its properties, this ink can be a bit hard on a fountain pen, and I haven't dared using it in a TSWSBI, my favourite pen at the moment, only in a Lamy Safari (which is a great pen too).

So I've been looking for alternative blacks, and also, I wanted to try out some different browns. I really like Noodler's Brown, but maybe a bit of a darker brown would be nice too. Last week, my order of some bottled inks and ink samples arrived. Two bottles of black ink - DeAtramentis Archive Ink and Noodler's Black (American) Eel, and a bottle of Noodler's 54th Massachusetts, a blue-black. And some ink samples: Noodler's Red Black, Noodler's Walnut, Noodler's Whaleman's Sepia, Noodler's Q'ternity and Noodler's Turquoise.

Different papers take inks differently, so I tested them in the three sketchbooks I'm using at the moment, my trusted Moleskine Sketchbook, the Fabriano Venezia and the Stillman & Birn Alpha. And there's been quite some surprises.

Moleskine
DeAtramentis Archive Ink, Noodler's Whaleman's Sepia and Noodler's 54th Mass. are all waterproof, as stated. Noodler's Black Eel and Walnut, weren't. I had let the ink dry for a couple of hours before adding water, and tried again after 2 days. I hadn't filled any of the inks into a fountain pen, but used a dip pen instead, which has a much denser and uneven ink flow than a fountain pen. But they were still not waterproof.  The Sepia is almost too rich, it spread on the paper almost like it was blotting paper, and even bled through the page. Same with Noodler's Q'ternity. 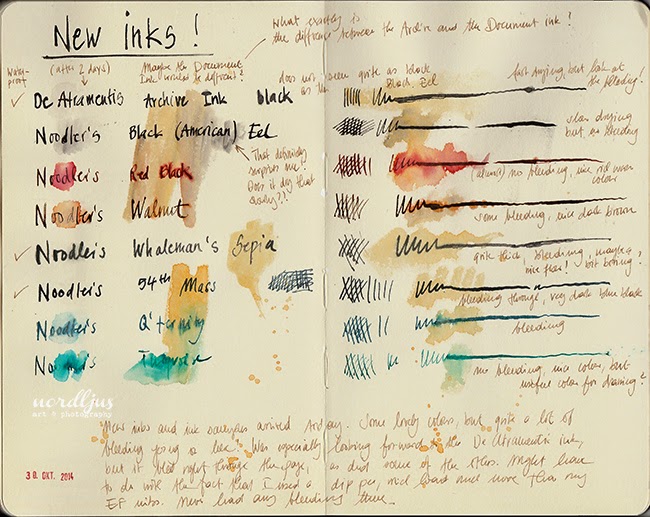 Lots of bleeding through the page with some of the Noodler's, especially when water was added. 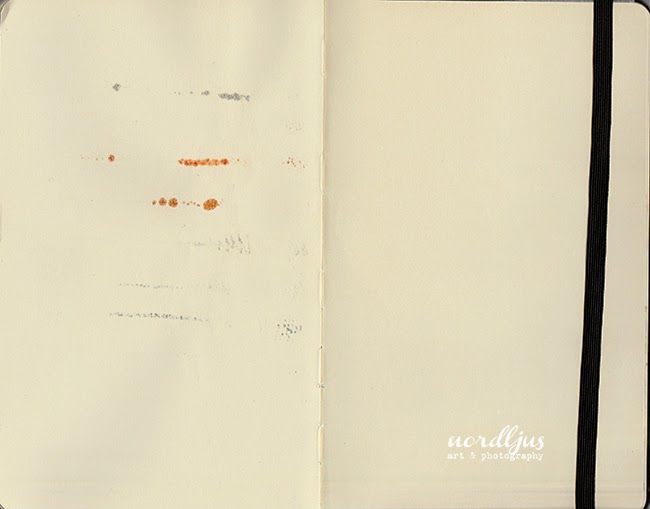 Fabriano Venezia
An older test with my three favourites Platinum Carbon, Noodler's Lexington Gray and Platinum Pigment Ink Sepia Brown. All dried quickly and are perfectly waterproof. Although the Platinum Sepia is a bit of a weird colour. 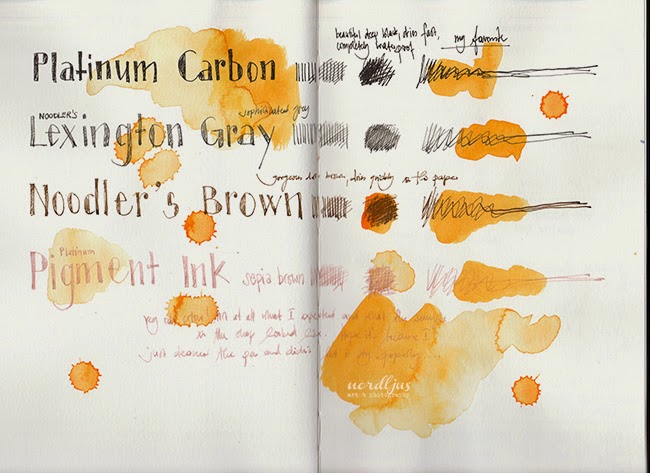 DeAtramentis proofed to be waterproof in this one, except for that patch of rich ink, which might just not have been completely dry, so that's okay. Noodler's 54th Mass did well again too. Both Noodler's Black Eel and Walnut dissolved when water was added. Noodler's Whaleman's Sepia dissolved only a little bit, it would take a light wash, I suppose, but it was the same problem with bleeding as in the Moleskine, only worse (and same again with the Q'ternity). 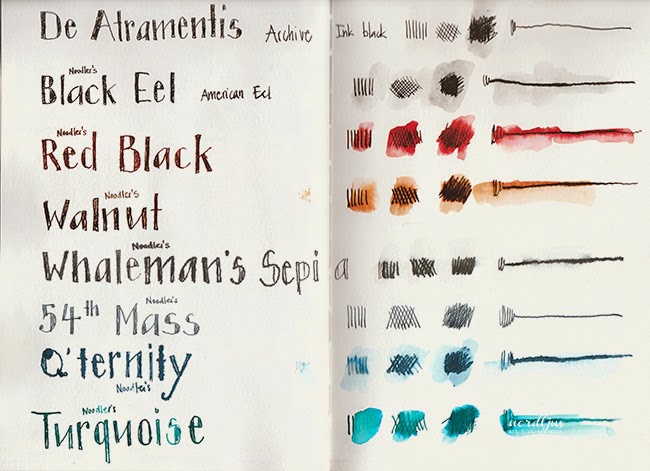 Of the new inks, only Noodler's Massachusetts was completely waterproof. So too were the old Carbon Platinum and Noodler's Brown and Lexington Gray. DeAtramentis, and Noodler's Black Eel, Walnut and Sepia all dissolved when water was added. 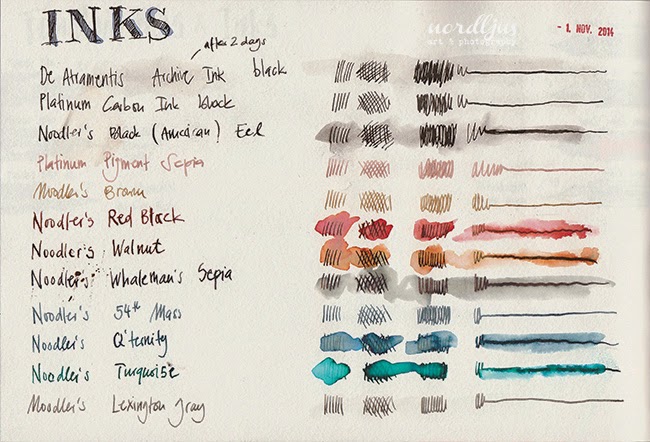 I really was surprised with the results of the DeAtramentis Archive ink and Noodler's Black Eel. DeAtramentis was only completely waterproof in the Moleskine and the Venezia, and  Noodler's Black Eel in none of them. I know that they are both used by artists who use them with watercolours, and so need them to be waterproof.
Noodler's Walnut, which is stated to be waterproof, wasn't at all, no matter which sketchbook. In fact, it reacted exactly the same as any of the other non-waterproof inks.
Noodler's Sepia was waterproof in the Moleskine, sort of waterproof in the Venezia, and not at all in the S&B Alpha. But then I'm not considering this ink anyway, as it's far too rich and spreads on the paper terribly, and even bleeds right through the page.

Blacks
I really loved my Platinum Carbon Ink. I believed it to be as black as can be, and I was quite surprised to see that, next to DeAtramentis Archive Ink, it looked quite a bit pale (you can't see it very well on these scans, I'm afraid). I have filled one of my TSWBIs with this ink and am going to try it out a bit more, and hope that it will be as waterproof as it is supposed to be. There is another waterproof black ink, DeAtramentis Document Ink. I'm not sure what exactly the difference is between the two, but I want to try that one out too eventually. As to the Noodler's Black Eel, I'm not quite sure what to do with that one.

Brown
As to alternative browns, well, the Noodler's Sepia is definitely not an option. I would  have liked to have Noodler's Walnut as a darker alternative to Noodler's Brown, but as it turned out not to be waterproof at all in my tests, it's no good. So I'm going to stick with Noodler's Brown. I do like the colour, so that's not a problem. DeAtramentis also makes a brown ink, and I hope to try that one too some time, so there might still be another option.

Blue-Black
I've always liked blue-black ins, it's the standard in my fountain pen I use for writing, and has been for the past almost 20 years, so I wanted to add one for drawing too. Colourwise I would have prefered Noodler's Q'ternity, but apart from not being waterproof, it also spread and bled on the page, so that's no option. Noodler's 54th Massachusetts is a little bit dull, I think, but it proofed to be perfectly waterproof in all three sketchbook, so I'm going to use that one for now and see how it works and how I like it.

Non-Waterproofs
Of the remaining non-waterproof inks, I really like Noodler's Red Black. It is a rich, dark colour that dissolves into a beautiful bright red when water is added. I think it could be used for some nice effects for drawings (As could Noodler's Walnut for that matter, since it is not, after all, waterproof).  I also liked Noodler's Turquoise, it's a beautiful colour, both with and without water, but I just don't really see it as a colour for drawing that I would use much. So I guess I'll just use up the ink sample, and that's that.

This has turned into a very long post, but I am always interested in reading about other people's experiences with different mediums, and so I hope that this post will be of interest to some of you too. And I'd be happy to hear of your own experiences with these, or with other, inks.
Posted by Nordljus at 09:00