Portraits from life, brush pens, and ready to party

Some weeks ago, I decided to quit pottery class, and instead take a portrait drawing class again, and I'm so glad I did. I had taken that class two years ago, and totally enjoyed it, and I'm totally enjoy it again now. It's not a class specifically with model (which would make the class more expensive) but our teacher sees to it that we have a model to draw about every other session. Last week, Werner sat for us again, and we tried to capture his likeness in ink. Our teacher had given us reed pens that she had cut herself to try out, and I decided to work in my portrait Moleskine journal, trying out different kinds of ink pens along with the reed pen.


For the one below I used a grey Pentel brush pen. They come in different colours but aren't refillable, and on the Moleskine sketchbook paper, it behaved similar to watercolours - not so well. 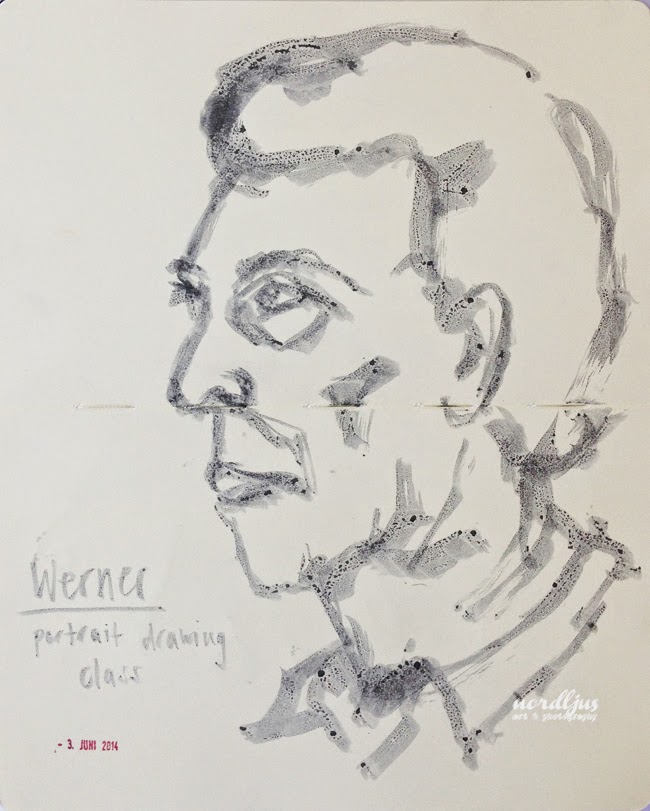 For the bigger portrait below, I used the reed pen with India ink. It works great, and I like the idea of making your own pens, but depending on the paper, the ink can run out quickly, and you need to dip your pen into the ink bottle every few seconds, which can disrupt your line. But it worked well enough in the Moleskine. For the smaller one, I used a Pentel pocket brush, a new acquisition which I really like. The pen takes cartridges, and so can be refilled and used again and again (until you've worn out the brush, I guess), but as far as I know, the cartridges only come in black, and the ink is not completely opaque but can appear a bit faded. 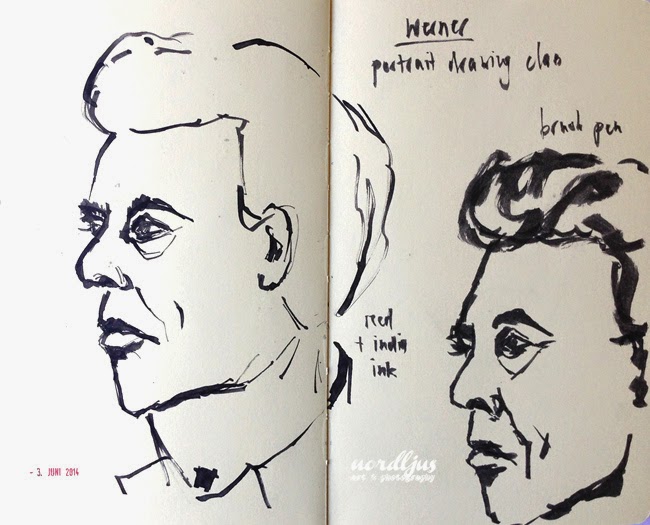 After the break, Rosmarie joined Werner as model, and it was nice to have a female to draw too.  I would have liked to do a drawing of both of them together, but from where I sat, they were too far from each other, so I decided to focus on Rosmarie. Because both models are a bit more mature in age, they have much more interesting faces full of characteristic lines. Although I sometimes find it a bit difficult, to really make them look as old and wrinkly as they are, especially the women. I'm always afraid that they'll be offended, somehow (I showed her the two portraits, and she wasn't). Which is probably also the reason why the first portrait I did of her, on the left, looks much younger. The one on the right is more accurate, although I didn't quite manage to capture her lovely smile.


Here you can also see better how "faint" the brush pen is. I've since found another brush pen, which is the same size as the Pentel one, but which can be used with a converter too, like a fountain pen, which means you have a much greater variety of colours to choose from (bottled ink), and which also can be filled with a lovely carbon ink, which dries instantly, is completely waterproof, and really is pitch black. 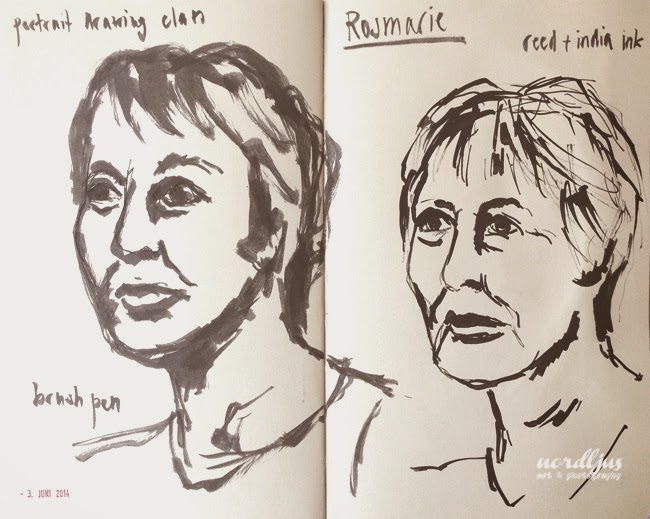 The portrait on the left below also started as a portrait of Rosmarie, but after two hours of intensely concentrated drawing, I just ran out of energy, and I soon knew that nothing satisfactory would come out of it, and that the best thing was to stop. I had meant to work a bit more on the sketch at home, to finish it, but then decided that I liked the unfinished one, and just added a touch of colour with a Liquitex paint marker. I had never tried them out on Moleskine paper, and I'm really pleased with the result.


I decided to try out some more pens and paint marker and painted the portrait on the left last Friday night, on the sofa. I was watching tv, an old series from the 70s, where the camera focuses much longer on objects and faces than it does today, and I thought I might do a sketch. It turned out to be too fast for me, after all, so I just did an imaginary face, added some paint, and then added some stamped lettering too. As I've mentioned before, I'm not a party girl at all, and a perfect Friday night for me is spent on the sofa, with a sketchbook and something good on telly, a nice cup of tea and an early night, so that I can get up early on Saturday morning and spend the day in the studio. So this is probably the expression I would have on my face if someone suggested to me to go out clubbing and partying all night on a Friday night. Slight terror, frantically wrecking my brain to come up with a reasonable and accnptable excuse why I absolutely can't go out. 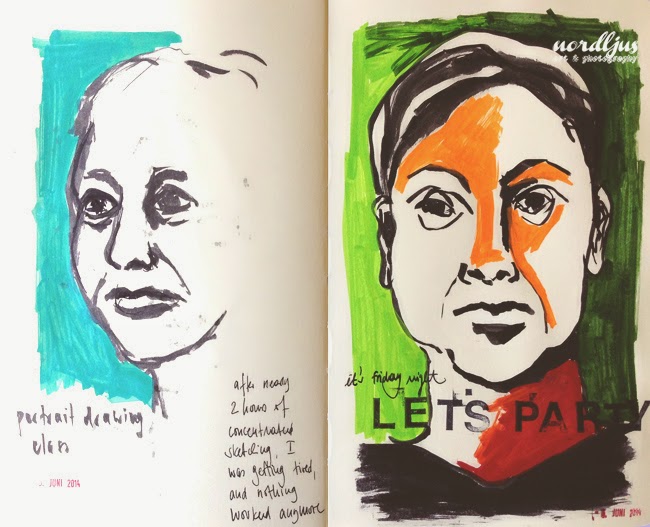 For the two portraits below, I used a big fat Faber-Castell pit Artist Brush Pen. It's great as you can fill in bigger areas quickly, but also has quite a fine tip. And it's nice and dark too. Both drawn from imagination, and using the paint markers for background, and some letter stamps. 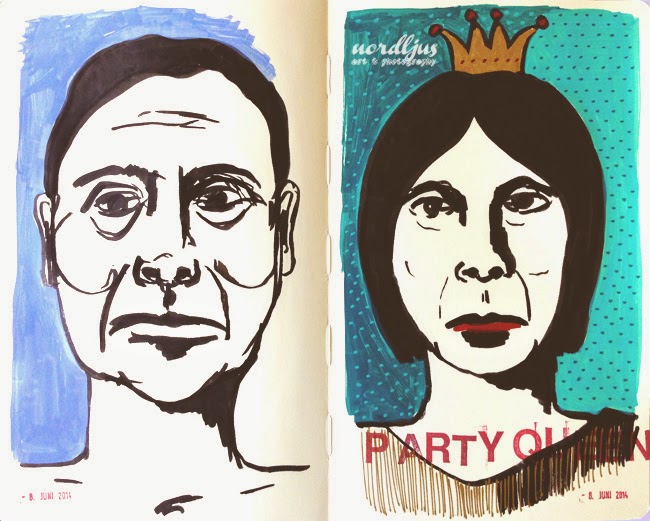 Well, I might not be a party girl when it comes to going out on a Friday night (or any other night, really), but one party I definitely like to go to is the fabulous Paint Party Friday. Pop over and have a look at what everyone else has created, it's always a great inspiration.
Posted by Nordljus at 08:01