Last week, I learnt how to trim my bowls in order to prepare them for their first firing in the kiln. To trim a bowl, you fix it on to the wheel, cut the excess clay off and establish a foot on which the bowl will stand. It's a bit of a scary process, so much that can go wrong. But it all went alright. Mostly because my teacher did most of the trimming, and I just scraped off the bits in the middle, which took me ages. And apparently, I didn't do a very good job at it. But I was just too afraid to cut too deep and make a hole.

This week's pottery class was really exciting! After last week's trimming, my first four bowls had gone into the kiln for the first firing, and were ready for glazing. 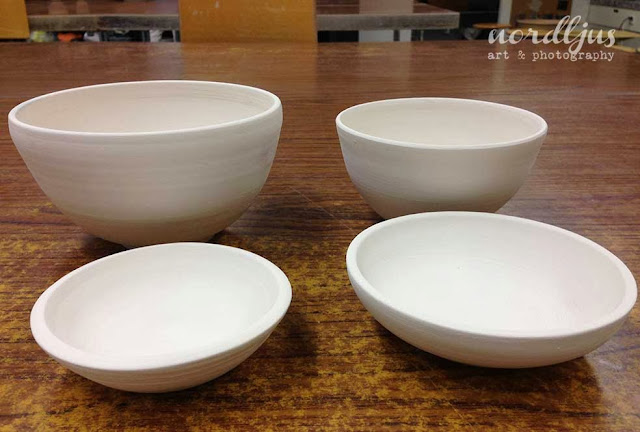 Glazing in pottery is completely different than painting. You can't mix colours, like you would with paints, but have to use ready mixed glazes instead. There are different glazes, and different methods of applying them, such as dipping the objects into them, or painting them on with a brush. I decided to use brush on glazes, as this involved at least something that was familiar.


The glazes dry almost immediately, and they look completely different than what they do after having been fired. This glaze here, for example, is called "Iceflower", and is a lovely white with a cool blueish marbled effect, which you can't see at all here. It's just white. Another glaze I used was a deep ocean blue/gree. The liquid glaze was just a very pastel mauve, nothing at all like the intense dark deep blue/green colour on the label. I still find this rather confusing. It gives you no clue at all as to what it will look like when finished. You have to rely completely on the samples, and hope that it will turn out like that. Also, the glazes are very dry, matt and powdery. Nothing like the smooth, shiny and hard finish they'll get in the kiln. 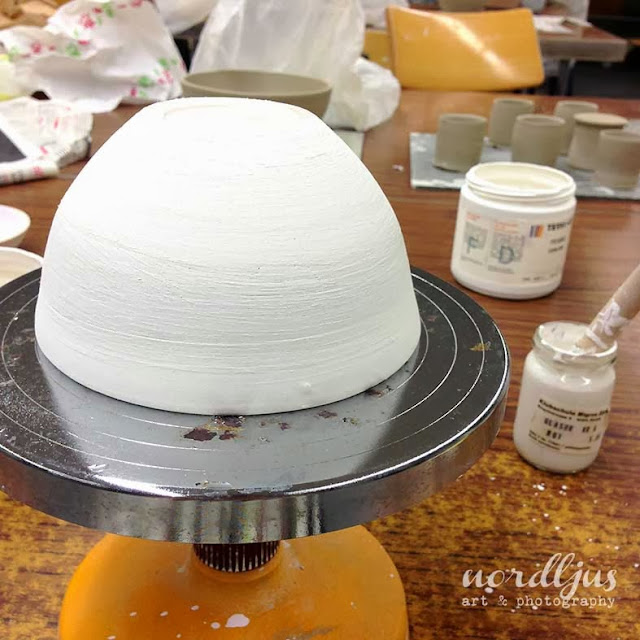 My bowls should have gone into the kiln for the second and last firing already, or if not, should do so tomorrow. In any case, they should be all done and ready to take home by Tuesday. I can't tell you how excited I am! I just hope they all made it savely through the firing, that none of them burst, or had the glazes running, or whatever else can go wrong in a kiln at a temperature of around 1200 degrees Celsius. And maybe one of them might even make it under the Christmas tree as a present.
Posted by Nordljus at 18:00