Learning something new, and loving it so far

A a few weeks ago, I decided to try out something new, something I've always wanted to do: pottery. I thought long and hard about whether to go for a sculpting or wheel throwing class, and eventually signed up for the latter. Mainly because I thought that this way, I would end up with things that would not only stand around gathering dust, but could actually be used. 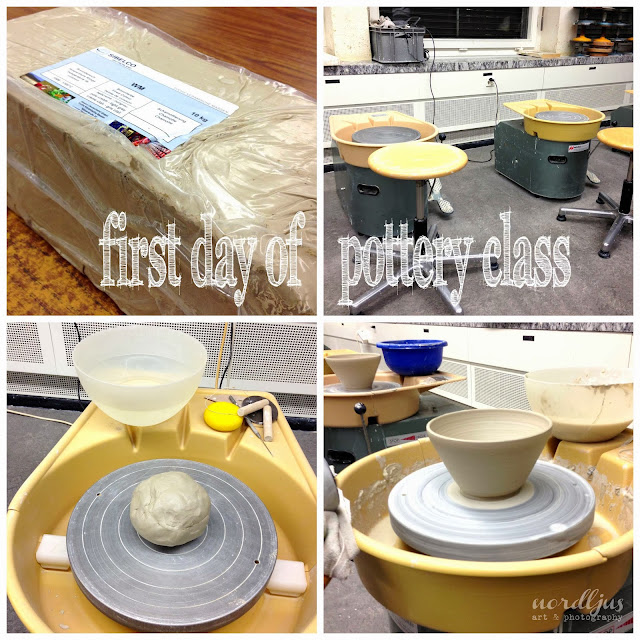 So three weeks ago, I went to my first pottery class ever. I was a bit nervous, because, to be honest, while I love learning, I hate being a complete beginner. Having no clue, no control, no skill at all. But there's no other choice. I was glad that there was another beginner besides me, and the teacher took time to explain all the basics to us, and show us how to prepare the clay, and it wasn't long before we threw our lumps of clay on the wheel (so exciting!). 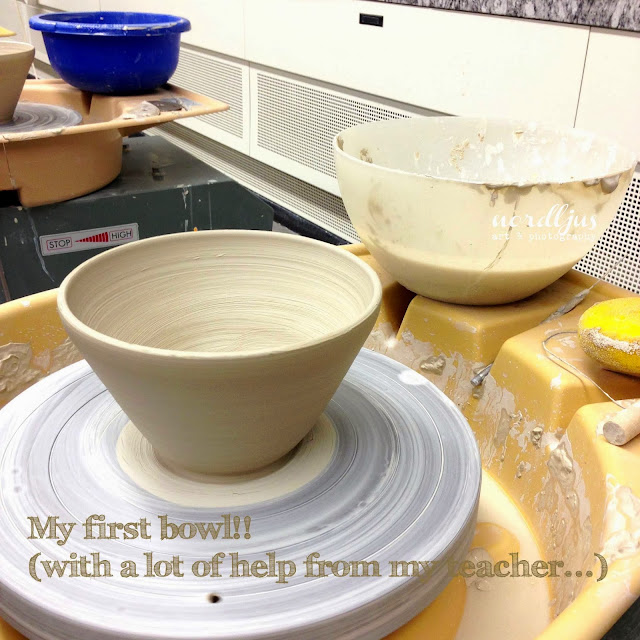 To prepare the clay, you have to knead it properly, to get all the air out. It's hard work, and it can take quite a while until it's ready, but it's important to do it well. When you're done, you form your clay into a ball, and then throw it on the wheel, as much into the centre as possible. Then switch on your wheel, and start to centre the clay, pulling it up and pushing it down again at first. This can take ages, and I always feel that when I finally got it centred, I've got about half of the clay I started with left. The next step is to make an opening, and then to pull the whole thing up, ring by ring, and give it the form you want. It always fascinates me watching my teacher pulling it up. It's a bit like magic. And I just absolutely can't do it. It just won't go up. I still have very little "feel" for the clay. How much pressure is too little or too much. I'm still a bit afraid of the clay. But I hope it will come soon.

Now we let the bowl dry with the help of a blow dryer for a few minutes, with the wheel spinning very slowly, and afterwards shape it with a round tool from the inside, to give it a nice round bowl shape. Then it's time to take it off the wheel and let it dry for a week or two. That's how far we got. So far, I have thrown four pieces, two bowls, and two smaller flat bowl thingies. Flat because with the first ones, the walls got so thin when I tried to pull it up that it broke and it had to be cut down, the other one because I just couldn't get it up. That last one was one that I did all by myself, without help of the teacher. Her comment on it was: "Considering that you did it all by yourself, and it's only your third day of class, you did not bad". So you can imagine what it looks like: flat, wobbly, and with a quite thick and uneven wall and rim. 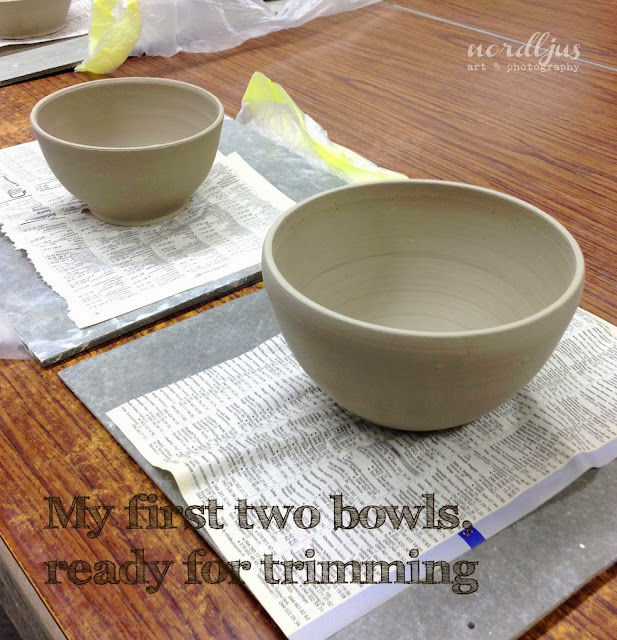 Next week, we'll learn how to trim our bowls. That is, to remove excess clay with the help of a cutting tool (oh my, I can just imagine so many things that can go wrong here!!!) and to establish a foot on which the bowl will stand (which is also important for the firing in the kiln). And then it's off into the kiln for the first firing, and then it's time to glaze it (I'm really looking forward to that part!), and then back into the kiln again for a last firing at very high temperature. And then it's ready to use! 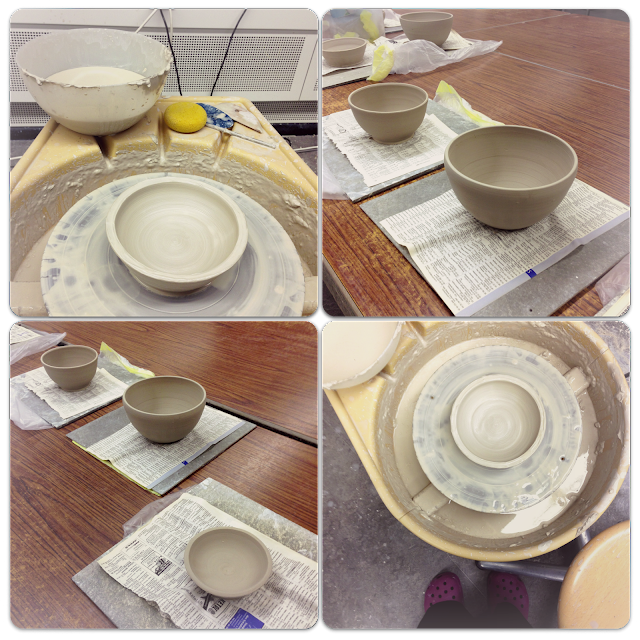 I really hope that at least some of the pieces will be finished before the Christmas break. I just can't wait to see them all finished! And I just hope that I won't mess it up too much, and not break anything.

I still got so much to learn, but I'm really enjoying it. I love the feel of the wet clay, the spinning of the wheel, the concentration and how you just can't rush it. It's very meditative, and you can really switch off very well (you'll be far too busy trying to get it centred, and up, and not send the clay flying all over the workshop to think of anything else, really). And you can throw a bowl in a relatively short time, and it's just so satisfying to see how you made a beautiful (more or less, anyway) bowl from a lump of clay. It's something I'll definitely want to continue with. My goal is to learn how to make tea mugs one day!