A is for Albatross

I've been thinking about using one of my sketchbooks to do an illustrated alphabet, and last Sunday, I finally got started on the first page. I've made a list in my notebook with ideas for each letter. It's fun to think of things, and I've already filled in a lot of the letters. But there are some letters I just can't think of anything at all at the moment. Well, was easy to choose. A stands for Albatross. 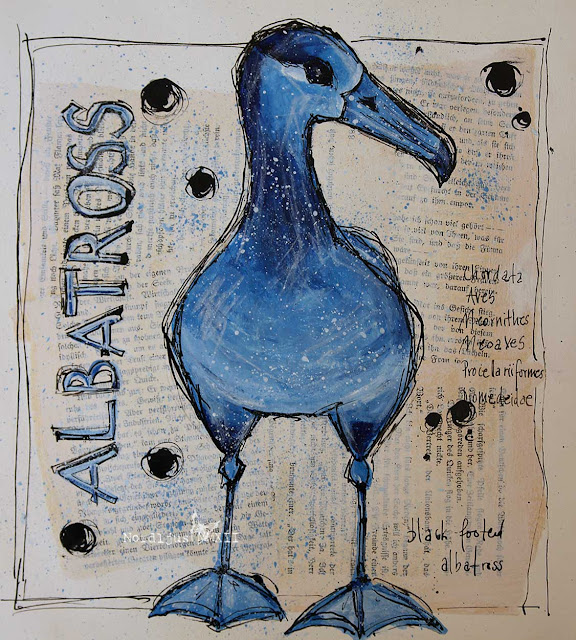 This one is a black-footed albatross. Black-footed albatrosses aren't really blue at all. They are dark grey/black, with black feet, obviously. But the photo I decided to use as a reference had a blue tinge, and I thought it just went well with my blue winter page and palette I used this week, so he turned into a blue albatross.

It's probably going to take me ages until I reach Z, with all the other things and projects I want to work on. And there are even more letters after Z to fill the remaining pages of the sketchbook. I'm not going to restrict myself to one language, but am just going to use whatever fits best. And it doesn't really matter how long it  is going to take anyway. 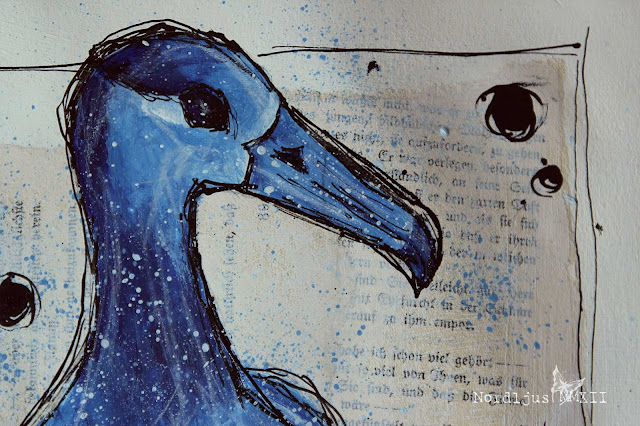 I took out my good old "Wahrig" dictionary to add words beginning with the letter A, which gave me a bit of a headache. Might think of something else for B. I cut out the letters from book paper and pasted them onto the page. Apparently, although acrylic ink is made from acrylic paints, it is not as water-resistant as the paint itself (or maybe, I just didn't wait long enough for it to dry properly). Some ink blobs covered up most of the mess. Must remember to mix my own liquid acrylics again for writing. It's not a big deal to do. You just add enough water, really. 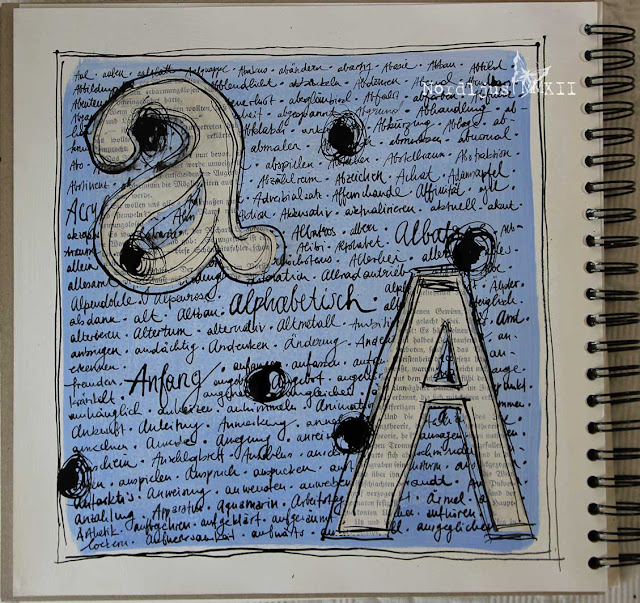 Why an albatross? It's not that I have a special thing for albatrosses, let alone ever seen one. But I've recently discovered the books by Swedish author Majgull Axelsson, and I've become addicted. They are not cheerful books, often rather depressing, really, and sometimes even disturbing. They're mainly about women and their relationships as mothers, daughters, sisters, wives, and no matter what their circumstances in life are, no one is ever really happy. I've read four of her books, am reading the fifths one and have one more waiting in my bookshelf. Somehow, her books totally speak to me right now. It's their bits of wisdom I seem in need to hear at the moment. Suche as the sentence from her latest book "Moderpassion": Livet skulle ha kunnat vara mycket annorlunda. On än inte nödvändigtvis bättre. (Life could have been very different, although not necessarily better). Yes, a different life would not necessarily have been so much better. At the end, it's all about what you make of it.

My favourite book of her so far is "Den jag aldrig var". It's about MaryMarie, who's leading a sort of double life. One of her personalities is Mary, the successful minister, who, when life becomes just too much, is struck by a form of aphasia where, whenever she tries to speak, the only word that comes out is "albatross".


Anyway, it's Friday, it's almost weekend, and time for party now!
Happy Paint Party Friday!
Posted by Nordljus at 08:52