This week's (week 29) theme of 52 of Twenty Eleven is "Music to my ears". I'm not someone who listens to music all the time. I like to listen to music at home occasionally, but more often than not forget about it alltogether, being too much absorbed in reading a book or painting in my study/library/studio. I mainly used to listen to music on my MP3 player in order to block out the noise of my fellow commuters (most of all the sound of music coming from the headphones of others). But unfortunately my player sort of died on me, so there's no music on the train anymore for me, but earplugs instead.

So what's music to my ears? The rustle of the leaves in the trees in the forest (or in this case, the pouring rain).

My own footsteps on the soft forest floor, the chirping and singing of the birds in the trees, the rustling of some small animal in the undergrowth, some fir cone hitting the ground. 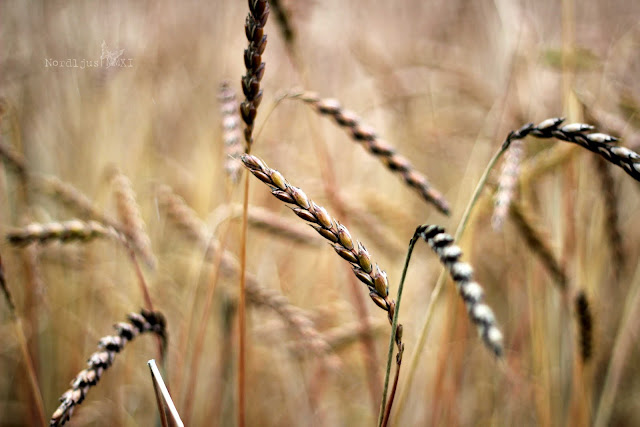 The whispering of the wind in the corn fields (spelt, in this case).


The mooing and grazing of the cows and the sound of their bells, a farmer's dog barking in the distance (far enough away, I'm a coward when it comes to barking farm dogs...).


The sound of the pouring rain, although I would prefer to hear that outside my window while I was comfortably on my sofa with a nice cup of coffee, rather than on my umbrella while slowly getting soaked through.

A refreshing, revitalising, walk with the various sounds of nature all around me - that's music to my ears.
Posted by Nordljus at 22:35