I went through some of the many folders on my external memory drive last night and found some images I took last summer in London's Bushy Park after a day spent at Hampton Court.

In my guide book, it said that the park was full of deer and that you'd have a good chance to see some. It wasn't long after I saw the first deer grazing a little distance away. And there were loads more to come. It's really amazing how close you can walk past and take pictures of them. We have a lot of deer in Switzerland as well, but they all live in the forests and you hardly ever get to see them, at least not so close.

I had made the one or other attempt at processing them, back in summer, brightening it up, saturating the colours a bit, and so, but I didn't really know what and how to do with them (the originals are rather dull) and so I just gave up. But last night, I just felt like giving it another try. I felt that I finally knew what to do with them.

There was this group of fawns (is that the right term? and it's probably not 'group' but 'herd' or some other term one's never heard of before) lying in the shade of the trees in the evening sun (it was a very hot day). I just love those two on the ground on the left and foreground with their silly smiles on their faces :-). 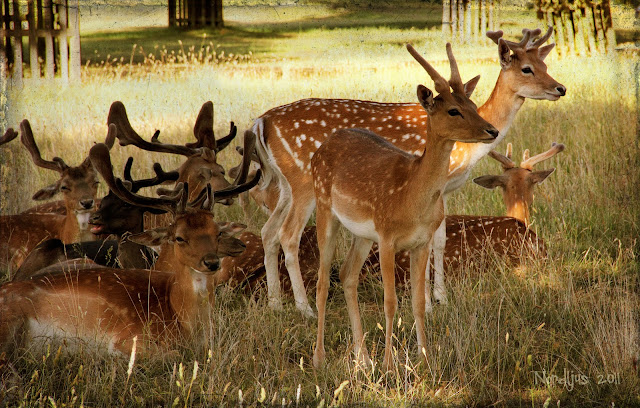 Later on, there was a group of stags grazing quite close to the path. I took loads of pictures, first from far away and then closer and closer. I couldn't believe how close I could get to them - and none of them ever even lifted his head to look at me. Ignored me completely. I must say, I was rather glad about that though :-). 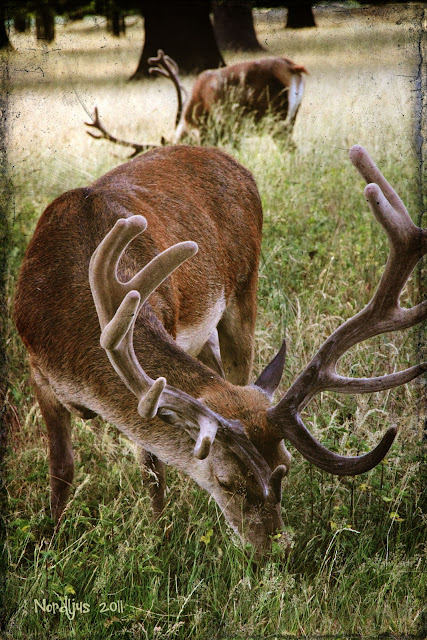 It was a lovely day out there at Hampton Court and in Bushy Park. And a lovely holiday, all in all. Amazingly, in the two weeks I spent in London, it rained only once, and that early in the morning, providing wonderful and dramatic clouds over the Thames and London Bridge in the afternoon. Apart from that, it was hot and sunny every day and I came home tanned and sunburnt - and with everyone looking very suspiciously at me when I told them I'd just come back from a holiday in London :-). I'm going to London again this summer. I've been there many times but there are still so many things and places to discover, and I find something new every time I go. I don't think I'll ever get tired visiting that city :-).
Posted by Nordljus at 08:41