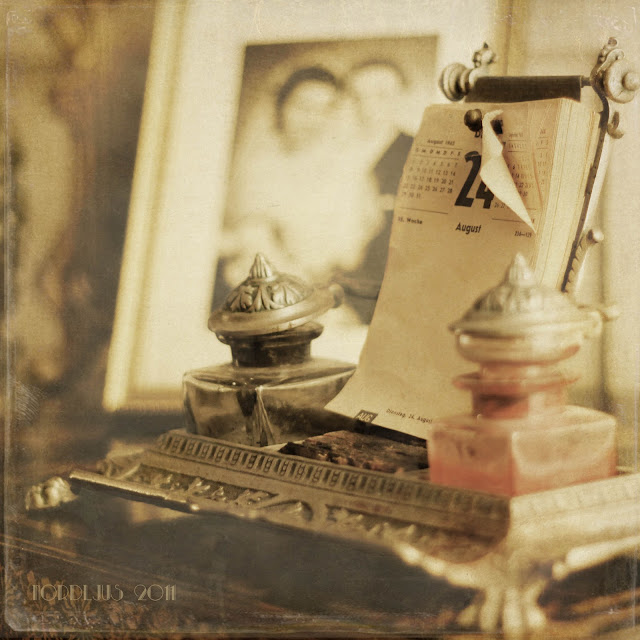 I had in mind and took this image for the 52 of Twenty Eleven group for this week's prompt "Memories". But when I saw yesterday's prompt for Picture Winter I knew that it would just be perfect for that as well. So this will have to serve both and considering that I spent almost three hours last night with taking and processing this, I simply wouldn't have had the time to take another shot anyway :-).

If only this inkstand could talk! How I would love to listen to its stories! It does indeed tell many stories.
One of them is my own, of my father's childhood and why I was born in the country where I live today. Of "Aunt Emily", who is only a vague childhood memory of mine but lives on in the beautiful objects that are now in my possession and among my most cherished ones (as this inkstand) and about whom I only learnt much later that she wasn't actually my or any of my parents real aunt, not even a relative.

But this inkstand holds many more stories and memories about which I'll never know. About the person who owned it (Aunt Emily's father?) and who stopped using it on 24 August 1943. What happened on that 24 of August in the middle of the Second World War? Did the person die? And why has never anyone used it again or removed the calendar and replaced it with a new one? These stories I will never know.

One sentence in the assingment for Day 19 for Picture Winter says: "Capture something that will give us a glimpse into your world". My Mum often tells me that I live too much in the past. In the books I read (basically everything before mid 20th century), the music I listen to (I have a passion for 1920/30s Dance Band Orchestras and early jazz), the way I live (old furniture and vintage pieces - I persuade my mum to let me have the old pieces and she replaces them with modern furniture in their home :-) ) etc. etc. I think she's got a point. But I like it that way. This is my world, a world full of stories and memories and voices from the past, and the inkstand is a part of this my world. And as long as it is in my possession, it will always show the 24 August 1943.

The picture in the background, by the way, is my (real) aunt and uncle's wedding photo. They're in their early 80s now and have been married for almost 60 years. They also have a lot of stories to tell, though their stories and memories of 1943 certainly are a lot different than those of the owner of this inkstand were, as they did not live through the war in relatively safe Switzerland.


Textures by Shadowhouse Creations and Kim Klassen.
Posted by Nordljus at 10:02